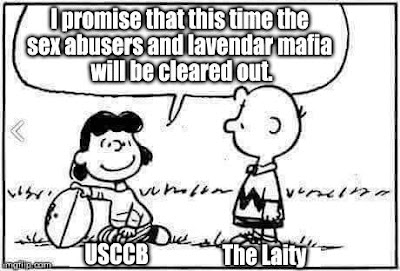 I wrote the following message on Facebook a few months ago, but given the miserable failure that the USCCB meeting in Baltimore is proving to be, it seems even more appropriate now.

You fellows had your chance to clean things out in 2002. The fact that one of the leaders of this effort back then, Theodore Cardinal McCarrick, has now been revealed as an abuser himself and a harasser of seminarians has demonstrated that the whole process was a sham.

As former governor Frank Keating said recently: "Judas Iscariot is walking the earth, and is among the council of bishops." For those who don't remember, Gov. Keating was the leader of the ill-fated National Review Board charged with investigating the scandal in 2002. He quit when he realized that you weren't serious. Hear more from Gov. Keating here: https://www.theamericanconservative.com/dreher/frank-keating-on-the-catholic-bishops-today/

Now, the trust is gone. Many of you need to resign, and soon, for the good of the Church.

See this website for more information about bishops who should have done something about Cardinal McCarrick but failed: http://complicitclergy.com/

Needless to say, there have been no resignations from this group. Only stonewalling, excuse-making, and pitiful attempts to apologize. There need to be consequences, however.

Whatever moral authority our Catholic bishops once had, it's quickly slipping away and this is a disaster for the preaching of the Gospel of Jesus Christ.

I pray that God will cleanse His Church and send us saintly men to be our shepherds. The current group seems to be capable of nothing but sowing confusion, frustration and discord.

Thank God for Archbishop Viganò who wrote the following brief letter to the USCCB. He is perhaps the only man in this whole sordid affair who actually speaks like a believing Catholic:


I am writing to remind you of the sacred mandate you were given on the day of your episcopal ordination: to lead the flock to Christ. Meditate on Proverbs 9:10: The fear of the Lord is the beginning of wisdom!

Do not behave like frightened sheep, but as courageous shepherds. Do not be afraid of standing up and doing the right thing for the victims, for the faithful and for your own salvation. The Lord will render to every one of us according to our actions and omissions.

I am fasting and praying for you,