The Feasts of Saint Monica and Saint Augustine 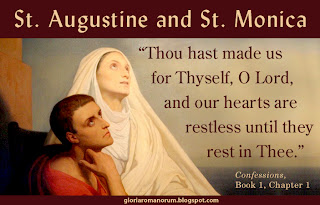 I put this together in honor of the feast of St. Monica today, and St. Augustine tomorrow. Here's the complete quote in context:

1. “Great art thou, O Lord, and greatly to be praised; great is thy power, and infinite is thy wisdom.” And man desires to praise thee, for he is a part of thy creation; he bears his mortality about with him and carries the evidence of his sin and the proof that thou dost resist the proud. Still he desires to praise thee, this man who is only a small part of thy creation. Thou hast prompted him, that he should delight to praise thee, for thou hast made us for thyself and restless is our heart until it comes to rest in thee. Grant me, O Lord, to know and understand whether first to invoke thee or to praise thee; whether first to know thee or call upon thee. But who can invoke thee, knowing thee not? For he who knows thee not may invoke thee as another than thou art. It may be that we should invoke thee in order that we may come to know thee. But “how shall they call on him in whom they have not believed? Or how shall they believe without a preacher?” Now, “they shall praise the Lord who seek him,” for “those who seek shall find him,” and, finding him, shall praise him. I will seek thee, O Lord, and call upon thee. I call upon thee, O Lord, in my faith which thou hast given me, which thou hast inspired in me through the humanity of thy Son, and through the ministry of thy preacher.

Taken from: http://www.ccel.org/ccel/augustine/confessions.iv.html
Posted by Florentius at 11:00 AM No comments: 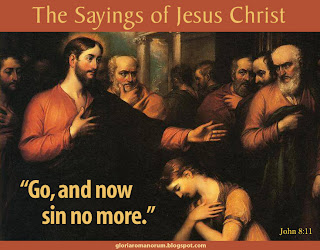 Then Jesus lifting up himself, said to her: "Woman, where are they that accused thee? Hath no man condemned thee?"

And Jesus said: "Neither will I condemn thee. Go, and now sin no more"

The Gospel according to Saint John, chapter 8, verses 10-11.

Posted by Florentius at 12:26 AM No comments: 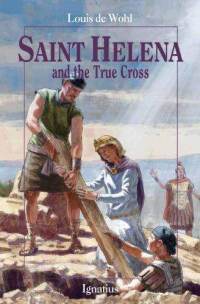 The daughter of a British petty king, the princess Helena is the lawful wife of the Roman governor, Constantius Chlorus. When Britain is treacherously taken over by a usurper, Helena is separated from her husband and forced to live in secret with her son, Constantine. When Constantius returns, however, it is with a new wife and a new title--Caesar of the western empire. Dejected, Helena finds comfort in the words of the Christian priest, Albanus. But Christianity is officially illegal under the persecuting emperor Diocletian, and Helena soon finds her new friends in grave danger. Summoning all her courage, Helena decides to confront her former husband and in doing so, possibly change the course of history forever.

For some time, I have had my eye out for a historical fiction treatment of the life of Constantine--preferably one that I could read with my kids. Though focusing on Constantine's saintly mother, Saint Helena and the True Cross fit the bill very well. I read it with my older kids and, as it turned out, everyone except the 15 month old listened in. The story was interesting and full of historical detail which allowed me to to diverge at certain points to give lessons about Roman and Christian history.

Re-released in 2012 by Ignatius Press, Saint Helena and the True Cross is not a new book. It was originally published in 1958 by Vision Books as part of their renowned series for younger readers. Written by Louis de Wohl, it contains all of the historical detail and narrative drive that one would expect from the author of such classics as Citadel of God and The Restless Flame. The book is an engaging retelling of the life of one of history's most amazing women, as well as a history lesson on the life of her famous son, Constantine the Great. Young readers and old will appreciate the epic sweep of the tale--from Britain, to Italy, to Jerusalem--all brought together via Louis de Wohl's masterful skill as a storyteller.

Helena herself is presented as an audacious, impetuous woman who was never to be denied when she had her mind set on something. And from what we know about her life, she must have been just that. De Wohl does take some liberties with the history concerning Helena's background, but this does not impact the story overmuch. Helena's search for the True Cross at the end of the novel is drawn almost entirely from sacred and historical tradition (particularly the account found in The Life of the Blessed Emperor Constantine by the Church historian, Eusebius Pamphilus) and makes for very compelling reading.

Though I thoroughly enjoyed Saint Helena and the True Cross and found it a fitting tribute to a great saint of the Church, I still think that Constantine deserves a sympathetic novel of his own--probably several. His life was simply epic. For more about Constantine's incredible life and career, feel free to check out my article from a recent issue of Catholic Men's Quarterly, Constantine: Military Hero and Christian Emperor, or the outstanding biography by Charles M. Odahl entitled Constantine and the Christian Empire.
Posted by Florentius at 11:23 PM No comments:

August 15 - Feast of the Assumption of our Blessed Lady

"[T]he Apostles took up her body on a bier and placed it in a tomb; and they guarded it, expecting the Lord to come. And behold, again the Lord stood by them; and the holy body having been received, He commanded that it be taken in a cloud into paradise: where now, rejoined to the soul, [Mary] rejoices with the Lord's chosen ones."

Email ThisBlogThis!Share to TwitterShare to FacebookShare to Pinterest
Labels: Catholic Church, Our Lady 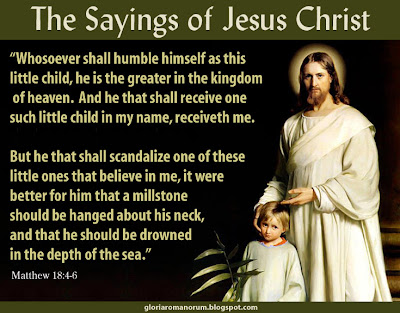 Here's the second in the series.
Posted by Florentius at 7:36 AM No comments:

The Sayings of Jesus, image 1 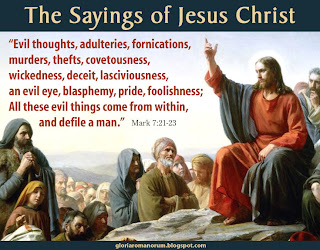 This is the first of what I hope will be a series of images on the sayings of Our Lord. There's so much garbage floating around the meme-o-sphere and so few images that celebrate the profound words and teachings of the Word incarnate. Let's rectify that if we can.
Posted by Florentius at 1:01 AM No comments: 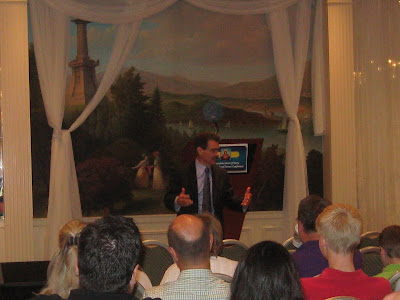 I had the privilege of hearing Catholic psychologist Dr. Ray Guarendi give two presentations this weekend at the IHM Catholic Homeschool Conference in Tarrytown, New York. If you've never had the privilege of hearing Dr. Ray speak in person, it's a real treat. He's not a podium-bound lecturer--his talk is more like a stand-up comedy routine. He uses his humor to effectively convey sound parenting advice, in this case to an audience of about 150 Catholic homeschoolers.

Want a good laugh? Here's a link to a talk that Dr. Guarendi gave in 2009 at the Man-to-Man Catholic men's conference. It's a variation of the talk he gave at the conference I attended yesterday, but the salient points are all there. It's about an hour long but I promise, it won't seem that long at all.
Posted by Florentius at 7:30 PM No comments: 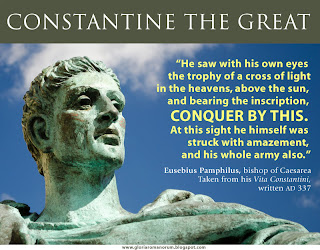 Presenting a new image with a quote from the proto-Church historian, Eusebius Pamphilus, bishop of Caesarea, about the miraculous vision of Constantine. Eusebius wrote this account approximately a year after the death of Constantine in AD 337, so it is likely that many people who witnessed the miracle (which would have taken place AD 312) were still alive at the time.

The statue featured in this image is located at York in the UK. Constantine was the only legitimate Roman emperor crowed in the British Isles.

The full Life of the Blessed Emperor Constantine was recently put back into print by Evolution Publishing and is a good read.
Posted by Florentius at 12:09 AM No comments: