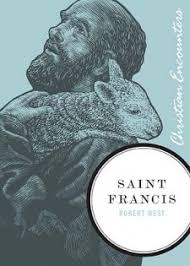 The Christian Encounters series is a well-produced collection of short biographies of individuals who in some way impacted (or were impacted themselves by) Christianity. According to the Thomas Nelson website, the series:

highlights important lives from all ages and areas of the Church. Some are familiar faces. Others are unexpected guests. But all, through their relationships, struggles, prayers, and desires, uniquely illuminate our shared experience.

Of course, they mean "Church" in the broadest possible sense, not specifically the Catholic Church. The list of individuals chosen for treatment is an eclectic one. Some of the subjects are obvious choices; others are curious; a few are simply out there. They include literary icons like Jane Austen and J. R. R. Tolkien, figures from science such as Isaac Newton and Galileo, contemporary political figures like Churchill and William Buckley, and great saints like Patrick and Nicholas.

I read the volume on Saint Patrick previously and enjoyed it. As a result, when I saw this volume on Saint Francis of Assisi appear on Amazon Vine, I grabbed it straight away. I admit in advance that my knowledge of the life of Saint Francis is rather spare, limited to a general outline and a few pious anecdotes. So I am unable to gauge the accuracy of this book. That said, I found Robert West's treatment of Francis to be thorough without being heavy, fascinating without seeming fabulous. Making use of primary sources as well as a long list of later works, he manages to convey a sense of the true man, divorced from the holy card caricature that most of us are familiar with. At the same time, he refrains from making ridiculous assumptions which desanctify the man. He does not discard the many miracles associated with Francis and does not dismiss the stigmata which Francis suffered late in life, but gives a balanced view drawn from the primary sources.

West does an excellent job placing Francis in his historical context. He clarifies the often complex religious, social, and political situation in Assisi and Italy more generally, helping the reader to understand how radical Francis actually was. He emphasizes Francis's embrace of Lady Poverty and describes his unusual ascetic practices--such as an extreme aversion to money to the point where he wouldn't even touch it, as well as his insistence that the friars beg for everything and own nothing. He quotes Francis's writing: "Any brother found with money or coin is to be regarded as a false brother, a thief, a robber, and one having a purse, unless he should become truly penitent." To further emphasize this point, he offers the following anecdote:

One time a secular person...left money as an offering. One of the brothers touched the money and threw it on the window sill. When Francis heard about it, the brother threw himself on the ground in front of him and was willing to suffer stripes. Francis upbraided him severely and finally told him to take the money in his mouth and to place it on the dung of a donkey outside.

West also includes an interesting chapter on St. Francis's great friend, St. Clare, which examines their relationship in detail. I read this chapter with some trepidation, fearing that the author might try to insinuate something beyond the great spiritual friendship that existed between these two amazing saints. Fortunately, West's account of their relationship was fair, cautious, and only slightly speculative.

St. Francis's legendary love of nature is also covered, though in proper proportion to the larger story and as a function of his belief that nature was merely a reflection of God's infinite love. This is important to keep in mind because Francis is treated by many moderns as some kind of secular environmentalist when in reality, nothing could be further from the truth. Francis's primary concern was always preaching the Gospel and leading men and women to Christ. This fact comes across clearly in West's book.

In his conclusion, West writes: "Once the word saint is attached to a name, that person's connection with humanity is severed. A saint is beyond human—existing somewhere between angelic realms and the heights of divinity." This book does an excellent job of putting Saint Francis back into his earthly milieu and helping the reader understand how such a rakish and worldly young man became one of the most venerated saints of history.

As a footnote, I read this book as my wife and I were discussing a name for our soon-to-arrive boy-child. We have decided on Francis.
Posted by Florentius at 9:12 AM 1 comment:

The Bantry Bay series by Hilda van Stockum wraps up with Pegeen, the story of an orphan girl who is taken in temporarily by the O'Sullivan family while awaiting word from her uncle in the United States. Full of spunk and mischief, Pegeen was introduced in the previous book in the series, Francie on the Run, when she met Francie O'Sullivan while chasing her run-away pig. In this book, her character is developed more fully. She is not an all together good girl at first. She has a tendency to cover her faults with outlandish fibs and to atone for her miscues by making them a thousand times worse. That said, she is presented as having a heart of gold and soon learns from her mistakes thanks to the kind guidance and understanding of the O'Sullivans.

My children absolutely loved this book--perhaps better than the first two books in the series, which is saying something. Several of Pegeen's misadventures had them laughing hysterically, particularly the incident with Patricia, the elder O'Sullivan girl's prized doll. The charming line art illustrations by the author were a great enhancement to the text and particularly helped bring to life the more humorous episodes. The book has a lovely though completely expected ending.

Having read all three books in the Bantry Bay series now, I can heartily recommend it. Van Stockum's books are especially well-suited for kids 7 through 10. My younger ones also enjoyed the series, and lurked around whenever we read out-loud. The writing flows well and is not overly simplified which made the series enjoyable reading for dad, too. A charming window into life in 1930s Ireland, the series is educational as well as entertaining. We will be moving on to Van Stockum's Mitchell series next, the first one of which is Five for Victory.
Posted by Florentius at 9:58 AM No comments: