The America-Hating Left Sinks to a New Low

Just when you thought the anti-war, anti-American left couldn't sink any lower, they plummet to Marianas Trench level. Below is a photo I snapped today of three absolute tools displaying their ignorance on Independence Mall in Philadelphia: 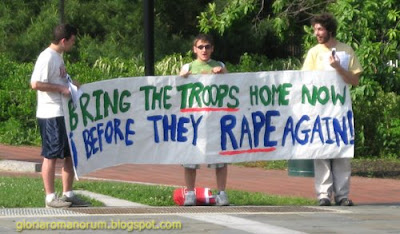 These morons have no idea how much harm they do their cause with stunts like this. A woman colleague of mine who is generally a liberal commented after seeing this display that these cretins ought to meet the business end of a blunt object.

For the record, I have no problem with legitimate expressions of dissent from President Bush's Iraq policy. Heaven knows, I've voiced it on occasion myself. But this approaches John Kerry-like status in terms of slandering our military.

Here's another picture of the same three morons: 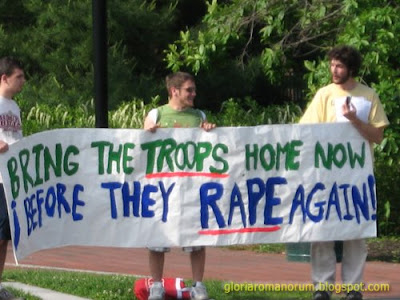 Posted by Florentius at 7:27 PM No comments: Links to this post

The Subway restaurant chain is running a story contest for kids with the grand prize being $5,000 in athletic equipment. Their official rules state:

Contest is open only to legal US residents, over the age of 18 with children in either elementary, private or parochial schools that serve grades PreK-6. Home schools not eligible.

In response to a storm of protest from homeschoolers, Subway issued the following non-apology apology, couched in some of the most ridiculous post-modern marketing-speak I've ever seen:

We at SUBWAY restaurants place a high value on education, regardless of the setting, and have initiated a number of programs and promotions aimed at educating our youth in the areas of health and fitness.

We sincerely apologize to anyone who feels excluded by our current essay contest. Our intention was to provide an opportunity for traditional schools, many of which we know have trouble affording athletic equipment, to win equipment. Our intent was certainly not to exclude homeschooled children from the opportunity to win prizes and benefit from better access to fitness equipment.

To address the inadvertent limitation of our current contest and provide an opportunity for even more kids to improve their fitness, we will soon create an additional contest in which homeschooled students will be encouraged to participate. When the kids win, everyone wins!

Did you get that? No? Well, I happen to be an expert at deciphering post-modern marketing-ese. Here's the translation.

We at Subway are sincerely sorry you annoying cretins found out about our contest. We didn't intend to exclude you — honest — even though our promotional copy specifically said "no home schools will be accepted". The reason we didn't include you is because there's a good chance you'll win — given all the time you spend studying and not attending diversity/sex ed/global warming alarmism classes — and we just can't have that. Oh, and by the way, you're still excluded from this contest, but we swear on our mother's grave that we'll include you in future contests. Trust us!

Well, the only good thing about this is that I don't have to boycott something I like. As I come from the land of cheesesteaks and hoagies, I have always found Subway sandwiches to be utterly tasteless and vile.
Posted by Florentius at 8:59 AM 2 comments: Links to this post

Here's the first in a sequence of graphics I'm working on to help shine the light on Barack Obama's empty rhetoric of "Change" and "Hope." In reality, his idea of change is the same snake-oil the hard left has been selling since the New Deal almost 80 years ago.

On the topic of abortion, Obama may be the most anti-life candidate ever to win a major party's nomination. Recall that he considers babies to be "punishments." He should get ZERO pro-life votes. 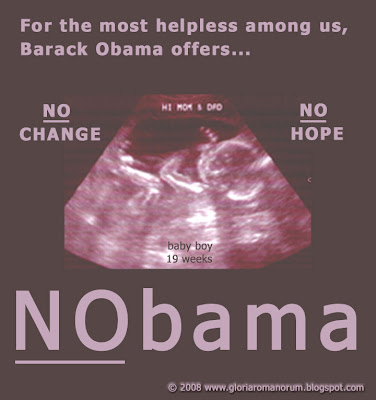 Posted by Florentius at 9:47 PM No comments: Links to this post

In a wide ranging conversation last week, the topics of modesty, cultural relativism, and JP II's Theology of the Body were raised. On one side, the position was taken that modesty could mean different things to different cultural traditions, and the example of a bare-breasted woman from Papua New Guinea acting as lector at a Mass for John Paul II was put forward as something that could be acceptably modest there, but not in the West. Further, it was posited (I think) that the reason it wasn't acceptable in the West was due to a cultural defect on the part of Western civilization that overly sexualizes the body.

While certainly agreeing with the later point--that the dominant "post-Christian" Western culture hyper-sexualizes the body, I took the position that cultural relativism was not a proper position to occupy and that Christianity has and should influence the cultures it comes into contact with in terms of correct behavior and mode of life. This includes how men and women display their bodies in public which should be modest and not tending toward attire (or lack thereof) that would arouse sexual desire in the opposite sex. This view was criticized as stemming more from American Puritanism than from Catholic teaching.

Of course, this is part of a wider, long-standing debate that goes back at least to the time of Fr. Matteo Ricci in China and before concerning which parts of a non-Christian culture are compatible with Christianity and could be retained, and which are not and should be discarded.

The Jesuits and other missionaries in the New World had much the same issue when preaching among the Hurons, Algonquins, and Iroquois. In general, the missionaries in New France made it clear to those who would be Christians that they would not baptize them until they believed and understood the tenets of the Catholic faith and conformed their lives to Catholic moral teaching. For many of them, this was tremendous change as Eastern Woodland life allowed for pre-marital relations and easy divorce, encouraged the blood-feud, sanctioned the murder of slaves at the whims of their masters, and celebrated the grotesque torture and cannibalism of enemy captives.

Indeed, going back to early Christian times, the Church has always been a culture unto itself and deeply countercultural to those it encounters in this world. The ancient martyrologies are replete with stories of early Christians who rejected their own culture to embrace Christ. To me, it seems somewhat condescending and paternalistic that we must make the modern road to Christianity more "culturally sensitive" for people from Papua-New Guinea than it was for the Greeks, Romans, Franks, Slavs, or Hurons. Indeed, this modern method of inculturation may often do more harm than good, blurring the distinctions between Christianity and those non-Christian practices that should be abandoned or at least deeply transformed. Claudio Salvucci's forthcoming book, The Roman Rite in the Algonquian and Iroquoian Missions is instructive on this.

But returning to the subject of modesty, here's the relevant section from the Catechism:

2521 Purity requires modesty, an integral part of temperance. Modesty protects the intimate center of the person. It means refusing to unveil what should remain hidden. It is ordered to chastity to whose sensitivity it bears witness. It guides how one looks at others and behaves toward them in conformity with the dignity of persons and their solidarity.

Based on this, it seems not unreasonable to expect a woman from any culture to cover her breasts before approaching the lectern at Mass.

More on this later.
Posted by Florentius at 11:27 AM No comments: Links to this post

Philadelphia Police Sargeant Stephen Liczbinski was murdered by three mutants on May 3. The actual killer, Howard Cain, used an SKS-carbine--a Chinese-made infantry rifle--to slay Sgt. Liczbinski. The suspects were fleeing from a bank robbery they had just committed. Eric DeShann Floyd, Howard Cain, and Levon Warner are career criminals who embraced Islam while in prison according to an article in the Philadelphia Inquirer. They were wearing Muslim garb during the robbery. The trigger man, Cain, was gunned down by police soon after the murder.

This is an awful story on so many levels. What is simply mind-boggling is that the mayor, Michael Nutter, and his allies in the local media are attempting to use this tragedy to further strip 2nd Amendment rights from law abiding citizens. Of course, these criminals broke existing laws simply by having these guns in their possession. As felons, these individuals were already forbidden from owning firearms. Not surprisingly, career criminals aren't up on the latest gun-control statutes.

The ones who are most dramatically affected by idiotic gun-control laws are innocent, law-abiding citizens. Making it harder for law-abiding citizens to own guns to curb violent crime is like putting down every dog in the city because some maul people. Criminals will still find a way to get firearms and by criminalizing gun ownership, the law-abiding will just become easier prey.

Locking predators like these three away forever is the only way to end the carnage in Philadelphia and other major cities. Don't expect Democrats like Michael Nutter to call for any reform in that direction, however. Convicted felons are an important voting block for Democrats.
Posted by Florentius at 12:54 PM No comments: Links to this post

Algae-fuel? Maybe not as crazy as it sounds...

PetroSun, Inc. announced in April that they will be ramping up their algae biofuel operations to produce an estimated 4.4 million gallons of algal oil per year on several salt water ponds covering 1,110 acres in Rio Hondo, Texas. CEO Gordon LeBlanc said:

“Our business model has been focused on proving the commercial feasibility of the firms’ algae-to-biofuels technology during the past eighteen months. Whether we have arrived at this point in time by a superior technological approach, sheer luck or a redneck can-do attitude, the fact remains that microalgae can outperform the current feedstocks utilized for conversion to biodiesel and ethanol, yet do not impact the consumable food markets or fresh water resources.”

In a press release from PetroSun released in early April, LeBlanc also commented:

"It will probably be stated that some of the above content might be considered politically incorrect from those who have chosen to stick their heads in the sand. That's their problem. Our children and grandchildren will require alternative fuel options to function as a similar social and economic system that the past three generations came to expect from cheap and abundant oil. Independents and wildcatters built the oil and gas industry. PetroSun has accepted the role of an alternative energy wildcatter and is moving energy forward... NOW!"

I like this guy's attitude. And since the stock of PetroSun (PSUD) is selling at a paltry $0.16/share as of today, I went out and bought myself 1000 shares. Foolish? Maybe, but considering the EE savings bond is earning about 1.4% interest and inflation is a lot higher than the government is admitting, there are plenty of other less risky ways to lose $160.00 in this economy.
Posted by Florentius at 12:53 PM No comments: Links to this post