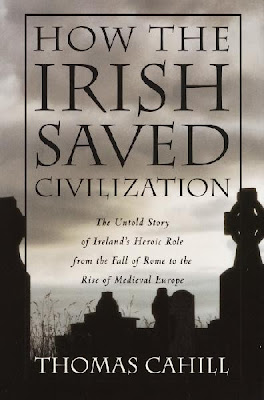 I am not Irish myself. However, I grew up among Americans of Irish extraction and my wife is part Irish. I therefore have a great respect and admiration for most things Irish. So when I laid hands on a copy of this book, I was anxious to read it.

Unfortunately, this is a classic example of a book with a snappy title that fails to live up to it. It is pure style over substance. Cahill is an author with an ax to grind and he is perfectly willing to cherry-pick historical anecdotes to support his thesis while ignoring those that weaken it. His style of scholarship is that annoying modern tendency to ascribe great importance to vague and contradictory statements from the ancients, while questioning and dismissing solid facts that have been commonly held for centuries.

My biggest problem with this book is simply that it takes forever for Cahill to get to "how the Irish saved civilization" and when he finally does get there, his treatment of the Irish contribution to preserving ancient scholarship is completely cursory. I was expecting chapters on Skellig Michael, Iona, Armagh and other centers of Irish monasticism. Instead, we are treated to Cahill's utterly false division of Irish Christianity from Roman Catholicism. He creates a scenario in which Saint Patrick and Saint Augustine are at opposite poles. He condemns Augustine as an "evil cleric" and the son of a domineering mother (Saint Monica) who is full of hatred and contempt for those who dared oppose him. He continually takes pot-shots at traditional Catholic practices, particularly (gasp!) the celibate male priesthood.

Meanwhile, he claims that Irish Christianity is not concerned with such petty matters as sexual purity. He notes that in all his writing, St. Patrick never came anywhere near the subject of sex except to make note of a "beautiful Irish princess." Based on that, he extrapolates that Saint Patrick--and by extension, Irish Christianity in general--was not beholden to the "rigid rules of chastity" enjoined by the Roman Church. His evidence supporting this contention is gossamer thin and almost entirely unreferenced in the book.

Cahill also hints that the Irish Christians tolerated abortion and had women bishops. In case his central theme isn't crystal clear by now, he even writes: "How different might Catholicism be today if it had been taken over by the easy Irish sympathy between churchmen and laymen and the easy Irish attitude toward diversity, authority, the role of women, and the relative unimportance of sexual mores." The answer to this question is that the Catholic Church would have become what mainline Protestant churches are today--dying, enervated museum pieces that accept everything and stand for nothing.

In the end, Cahill can't even bring himself to say that the Irish saving civilization was a good thing. He writes:


Latin literature would almost surely have been lost without the Irish, and illiterate Europe would hardly have developed its great national literatures without the example of the Irish...Beyond that, there would have perished in the west not only literacy but all the habits of mind that encourage thought. And when Islam began its medieval expansion, it would have encountered scant resistance to its plans--just scattered tribes of animists, ready for a new identity. Whether this state of affairs would have been better or worse than what did happen I leave to the reader to ponder.

In sum, I would not recommend this book. It is little more than a meandering anti-Catholic polemic dressed up as a tribute to the Irish. A good antidote to this book is How the Catholic Church Built Western Civilization by Tom Woods.
Posted by Florentius at 9:11 AM No comments: 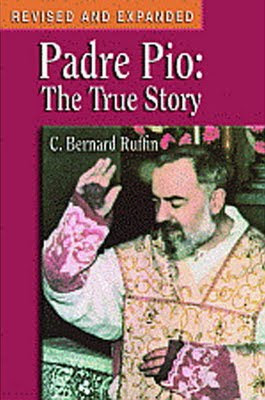 Padre Pio is easily the most well-known and beloved mystic saint of the 20th century. Like most people, all I knew about Padre Pio before reading Padre Pio: The True Story were second or third-hand anecdotes. A good friend's mother said she saw Padre Pio on a balcony in San Giovanni Rotondo and experienced the overpowering scent of roses. The brother of the music director in our parish may have been the recipient of a miraculous cure thanks to Padre Pio.

My own granny was from southern Italy and had Padre Pio knick-knacks around her south Philadelphia home when we were kids. So I started out with an affection for Padre Pio and this book certainly did nothing at all do dampen it. Now that I know the "true story", my love for the humble Capuchin is greatly enhanced. I believe he is a powerful intercessor before the throne of Almighty God.

Ruffin, a Lutheran, has done a remarkable job with this book, which is modern, fair, and intriguing throughout. He is open-minded when it comes to the truly credible miracle stories but skeptical when necessary. A bit over 400 pages long, the book is a very easy read, though slightly repetitive in spots. Pio's story is so engrossing, however, that I didn't mind the repetition. In fact, the book reminded me a few times of the great classical biographies of the ancient saints, like The Life of Saint Simeon the Stylite or Possidius's Life of Saint Augustine. It is amazing to me that such a person could have lived in the 20th century--dying a mere three years before I was born!

Clearly, Ruffin did a staggering amount of research for this book. It is full of solid factual material about Pio's life and his sufferings--physical, spiritual, and those brought about by his enemies within the Church. The phenomenon of Pio's stigmata is examined in detail and recent "news" reports that the wounds were self-inflicted are effectively debunked. The book is also crammed with tales about the extraordinary graces that God bestowed, and continues to bestow, on poor souls through Padre Pio's intercession. By the end, the reader is left with an excellent portrait of this good, humble, and holy man.

The version of this book we purchased was clearly a later edition. Though it bears a copyright date of 1991, it includes information at the end about St. Pio's canonization which took place in 2002. I highly recommend this book to anyone with even the slightest interest in Padre Pio. I know it will be well passed-around in our house.
Posted by Florentius at 9:58 AM No comments: Links to this post

Book Review - The Ghosts of Cannae 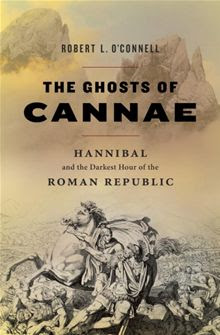 Roman history is an interest of mine, though normally I prefer to read it "from the horse's mouth" -- that is, from the primary sources. That said, I also enjoy a good modern retelling of Roman history, so when I saw Robert O'Connell's The Ghosts of Cannae, appear on Amazon Vine, I snapped it up. I'm glad that I did.

The book is an enjoyable read, easily approachable for someone who has never heard of the Punic Wars but still satisfying for someone starting out with a good knowledge base. O'Connell makes excellent use of his ancient sources and marshals his information into a coherent and compelling narrative.

The writing flows well and is easily followed, making the book a fairly quick read. I found some of O'Connell's turns of phrase a bit bizarre, though. At one point, he says that republican Romans followed the "Warholian rubric" when it came to turn-over of their government officials. He also describes Hasdrubal Barca's escape from C. Claudius Nero as "a vanishing act worthy of Bugs Bunny," though he goes on to assure us that Nero was no Elmer Fudd! While I assume many folks reading this book will understand what O'Connell is talking about, I somehow doubt references to Andy Warhol will make much sense to someone reading Ghosts of Cannae fifty years from now. Admittedly, I suspect readers even 100 years from now will be familiar with Bugs and Elmer, though. As 20th century cultural artifacts, Looney Tunes are worlds more potent and long-lived than anything Andy Warhol ever did.

While I am no scholar of republican Rome, I felt that O'Connell's treatment of the history was detailed, well informed, and fair. In only one place did I quibble with one of his claims--that annoying modern assumption that the speeches made by the ancients and recorded in histories were mere whole-cloth fabrications created by ancient historians to make a moral point. Referring specifically to Livy, O'Connell says:

Ancient history is replete with such speechifying, useful in delineating issues, dramatic, and at times elevating rhetorically, but it is not to be taken literally. There were no voice recorders or stenographers. Most speeches were extemporaneous.

While it may be true that most ancient speeches were extemporaneous, the idea that there were no stenographers is debatable. In my studies on Saint Augustine, I was surprised to find out that there were often "reporters" who followed around the great homilists writing down what they said--in shorthand. See this extract from Thirteen Homilies of Saint Augustine on Saint John XIV (1904) by Hugh Fraser Stewart:

I have trouble faulting O'Connell for this overmuch as he is only reflecting the conventional wisdom among scholars. It is certainly conceivable that Livy's speeches were all fabrications. But I think more caution should be used when making this assumption.

In summary, Ghosts of Cannae is a useful popular history of the Punic Wars. If you have a passing interest in this subject, you will do well to read it.
Posted by Florentius at 8:05 AM No comments: Links to this post