Book Review: The Face of God: The Rediscovery of the True Face of Jesus

I am of two minds about this book. I originally received a galley copy and assumed it was yet another private revelation story with little to back it up. However, the fact that Ignatius Press published it made me give the book a second look. As I began to read it, incredulity immediately crept in. The first few pages failed to convince me or hold my attention, so I put the book aside and moved on to greener pastures. My biggest obstacle was simply that the Holy Face of Manoppello was too ugly, too irregular, too obviously painted to be a true image of Our Lord “not made by human hands.”

Then, about a year later, I got a note from a Carmelite friend who had read the finished book and loved it. She had even gone so far as to repeat the experiments Sr. Blandina had carried out, comparing the face on the cloth in Manoppello to that the Shroud of Turin. The book, she said, had convinced her of Badde's thesis--that the cloth in Manoppello was actually the Veronica. With this endorsement on board, I took up the book again and quickly read it from beginning to end. I am glad that I did. Once you get past the occasionally awkward translation from the German, The Face of God reads like a detective story. While not completely convincing, Badde's evidence is compelling enough to force the reader to contemplate the Holy Face anew. Indeed, it was apparently convincing enough for Pope Benedict XVI to make a pilgrimage to visit the Holy Face in 2006.

Having read the book, I now turned to the internet to find more photographs of the Holy Face. Voilà! There is a website loaded with them: The Holy Face of Manoppello. The one thing I immediately discovered upon perusing these images is that the face on the cloth does actually change its appearance based on the angle and the lighting, as Badde claimed. Here is one such image: 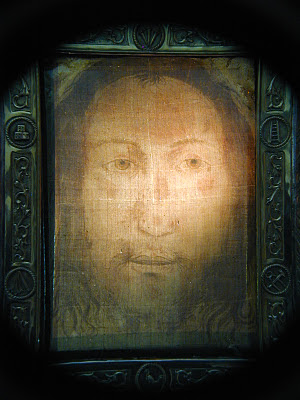 And here is another from a different angle: 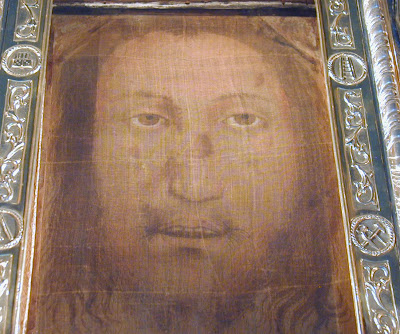 Having viewed the image in color from a variety of angles, another strange thing happened. Though the image still appears to me to have been drawn by a human hand, it no longer appears ugly. To paraphrase an astute observation on the Holy Face website, the image seems to contain within itself all the attributes of the mysteries of the Rosary. It is sorrowful, joyful, glorious and luminous all at the same time.

As I said, I am still not sold on the theory that this image is the original Veronica that was displayed in Old St. Peter's Basilica for hundreds of years. But at the very least, it is a very old and mysterious relic. The fact that it appears on byssus, or mussel-silk--an immensely costly material that will not hold a pigment and is nearly impossible to stain--adds to the mystery.

In short, this is an engrossing read. If you enjoyed books like Ian Wilson's The Blood and the Shroud, you will most assuredly find The Face of God to be equally intriguing.
Posted by Florentius at 5:14 PM 1 comment: