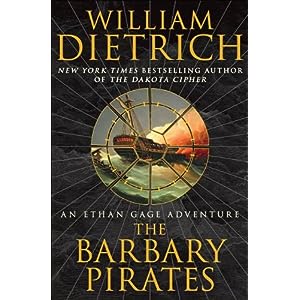 Much contemporary historical fiction is either too vulgar, too politicized, or too full of trite historical clap-trap for me to enjoy. So when I got this book, I began reading it with trepidation. Would this book fit into one of those molds? By the time I was finished, I was pleasantly surprised. Simply put, The Barbary Pirates is a light read, a page-turner, and a load of fun.

The Barbary Pirates is the 4th book of the Ethan Gage series by William Dietrich. I haven't read the previous books, but the author does a decent job of explaining things so that the reader doesn't feel lost. As it is, the book stands as its own entity very well. It tells the tale of American adventurer Ethan Gage. Gage teams up with a trio of historical 'savants' -- naturalist Georges Curvier, inventor Robert Fulton, and geologist William Smith -- to find an ancient artifact of incredible power. The four must find it before the nefarious Egyptian Rite, a shadowy neo-pagan cabal which seeks to use the item to achieve their megalomaniacal aims.

If this plot sounds familiar, it's because it's been done before. Lots of times. Gage carries a long-rifle, but he may as well be wearing a hat and bullwhip. He is Indiana Jones 150 years earlier -- a lovable rogue who is constantly getting into scrapes with both his mortal enemies and with the fair sex.

That said, Dietrich has managed to breathe exciting new life into an old trope. While not particularly deep, The Barbary Pirates is action-packed and full of historical curiosities that span the ages from pre-history to Napoleonic times. The book has the virtue of not taking itself too seriously. As such, it is a much more entertaining and satisfying read than similar books like, for example, The Da Vinci Code.

For what it is, The Barbary Pirates is a good read. It may be the perfect book for beach-reading this summer. I will have to seek out some of the previous books in the series to supplement my own summer reading list.
Posted by Florentius at 12:32 PM No comments: On this day, in Anno Domini 525, the city of Edessa, metropolis of Osroene in western Asia minor, was destroyed by a flood of the river Scirtus. Procopius describes this flood as catastrophic in scope, killing more than 1/3 of the population, or nearly 30,000 people.

The Roman Emperor Justin had the city rebuilt at great expense. During the reconstruction, an artifact was discovered in a niche above Edessa's western gate--the famed Mandylion of Edessa. This legendary image of the face of Jesus was purportedly brought to Edessa after the death and resurrection of Christ by His disciple, Thaddaeus.

The historian Evagrius Scholasticus, writing in the late 6th century, mentions the Mandylion as being instrumental in defeating a siege of Edessa by the Persian king Chosroes in AD 540.

In recent years, some scholars have attempted to link the Mandylion to the Shroud of Turin. One of the most compelling of these attempts may be found in Ian Wilson's book, The Blood and the Shroud.
Posted by Florentius at 8:55 AM No comments: 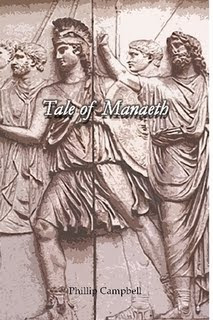 What do you get when you cross the Aenied, Beowulf, and Xena Warrior Princess? Why, you get Tale of Manaeth, of course, a new work of epic fantasy by Phillip Campbell. I received this book thanks to a tip from Maureen Wittmann and based on her description, I thought it would be a book I would enjoy. Indeed, it was!

At its heart, the tale is fairly uncomplicated. The arrogant king Belthazre of Maruda oppresses the people of the smaller neighboring state of Asylia. Much like the Trojan War cycle, the main conflict of the story arises due to lust and jealousy. When Belthazre demands the beautiful daughter of the Asylian king Ioclus--for no reason other than to provoke his envious wife, Queen Narussa--the Asylians are forced to decide whether to knuckle-under or to fight.

Obviously, there is a fight--multiple fights, in fact. Soon, it is up to young Maneath--also called Manissa--the daughter of Ioclus, to rally the Asylians against the invading Marudans. But how can she, a mere girl, defeat a powerful enemy with only a handful of stalwart men, starving and outnumbered?

Well, if you want to find out, read the book.

Tale of Manaeth is dedicated to St. Joan of Arc, and it's not difficult to see why. While the trope of the woman doing battle and taking down men twice her size is a trite and common one in popular fiction, movies and TV today, it was nearly unheard of in history with rare exceptions. St. Joan was one of those exceptions, of course. That said, the character of Manissa in this story, though a stout fighter, is nonetheless undeniably female and never becomes a mere parody of a man. There is none of the cheesiness here that's often associated with the modern "warrior princess."

So on the whole, I rate this book very highly and recommend it. It is especially good for teenage boys who will appreciate the action and combat. It's a fairly violent book, but the violence is of the epic variety and not gratuitous. The style of the writing is quite different from the typical page-turner prose we often see in modern fiction, so it may take some getting used to, especially for younger readers. But if you enjoy heroic tales of war told with the rhythm and style of the ancient epics, you will most certainly appreciate Tale of Manaeth.

Tale of Manaeth is self-published and is available from the author at http://www.taleofmanaeth.com/
Posted by Florentius at 10:36 PM 2 comments: 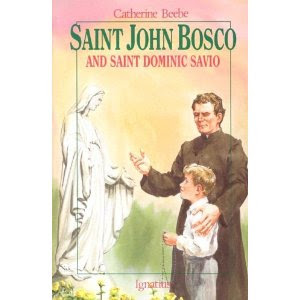 This book is the perfect intro to the life of Saint John Bosco for young readers. I have always had a fondness for Saint John Bosco myself, and when I saw this book, I thought it would be a great way to teach my kids about him. So we got this book and we read it together each night. Reading a chapter per night, we got through it in about two weeks.

The kids got a tremendous kick out of this book, as did I. The first part of it, detailing Saint John's early life, is full of poignant and humorous little stories about his various struggles and antics. Saint John Bosco comes across as a real person, not an impossible model of sanctity. He is full of zeal for Jesus and the Blessed Mother, and is one of those rare people who is able to combine that zeal with a magnetic personality. By doing so, he was able to touch the lives of hundreds and thousands of people and bring them closer to our Lord.

Two other saints are also mentioned in this book. Saint Dominic Savio was one of Don Bosco's boys who was a model of extraordinary virtue, even at a very young age. He died at 14 and was named a saint by Pius XII in 1954--the youngest non-martyr saint. The other is Saint Maria Mazzarello, foundress of the Salesian sisters. Don Bosco encouraged Maria to found the order after they both had similar visions of ministering to wayward and poor girls.

This book easily held my kids' attention (ages 7 and 6) and they constantly pestered me to read more. They especially loved the funny stories about Don Bosco's tricks as a young man, and his mysterious "dog" that seemed to appear whenever he was in danger. I'm hoping that it also gave them an appreciation for the religious life, as well as some perspective on how easy our lives our today, compared with those poor souls who lived only 150 years ago, many of whom died so young.
Posted by Florentius at 10:27 PM 1 comment: