I loved this quote from the first moment I read it...which was about 12 hours ago. 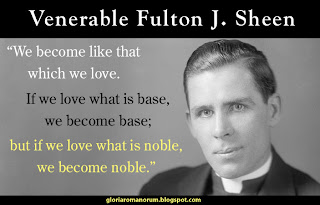 Posted by Florentius at 11:46 PM No comments:

The advancement of the cause of Archbishop Fulton Sheen has precipitated a flurry of articles about him and a well-deserved review of some of the great man's words and works. A few of his quotes which I haven't seen before have been circulating on Facebook, such as:


"If you do not live what you believe, you will end up believing what you live."

I also saw that in February 1953, Sheen said in one of his broadcasts of Life is Worth Living: "Stalin must one day meet his judgment." A few days later, Stalin suffered a massive stroke and was dead within a week.

After watching a video of one of his last homilies, given during the Easter Triduum in 1979, I felt the urge to make up a couple graphics featuring some Sheen quotes. This is the first one.


"Any book which inspires us to lead a better life is a good book."

This quote may be found originally in Sheen's Way to Happy Living (1955).
Posted by Florentius at 5:20 PM No comments: