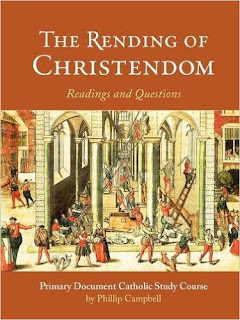 In recent days, the study of history has become less a search for truth and almost exclusively about the creation of a narrative to further a political ideology. Some might argue that this has always been true. In my experience, however, such claims are most often put forward by the most egregious narrative-creators themselves when their lack of objectivity is called into question.

I first noticed this trend while in high school. As an avid student of World War II, it was perplexing to me that the entirety of the war was summed up in my so-called social studies courses in two events: the atom bomb and the Holocaust. Hardly anything else was deemed worthy of discussion. Church history suffered a similar fate in my ostensibly Catholic schooling. We were presented with a narrative that nothing particularly good happened in the Church until the 1960s. As a result, all the events, achievements, miracles, conflicts, saints, heroes, villains, doctrines and teachings up until that point were given very scant coverage indeed. When I later discovered on my own how fascinating, rich and beautiful Church history is, I was astonished and angry. To quote my parish priest, I felt like what I had been told was a diamond was actually a cubic zirconia--and that the real diamond had been purposely buried to keep anyone from finding it.

As a result of this experience, I have come to distrust most modern interpreters of history (particularly those who don't wear their subjectivity on their lapel) and greatly value the study of primary sources when learning or teaching history. And that's where Phillip Campbell's The Rending of Christendom comes in. In an accessible 100 pages, Campbell offers a gold mine of basic primary documents dealing with the root causes, major events and personalities of the Protestant Revolution. The objective is to give the student a sampling of important sources from that era and teach them how to draw inferences from them. The documents run the gamut of the conflict, from well known sources such as Luther's 95 Theses and the Edict of Nantes to less studied but equally fascinating documents such as Luther's "Against the Robbing and Murdering Hordes of Peasants" and the final letter of Mary Queen of Scots prior to her execution.

I feel quite confident that few if any high school and college students in Catholic institutions have ever seen these documents before. Unlike most traditional textbooks, these documents do the opposite of reducing history to a bland sequence of names, dates and capsule summaries. Rather, they add the excitement of the present to the events described and put intellectual faces to the key names: Martin Luther, Ignatius of Loyola, Thomas More, Richard Hooker, John Calvin, Francis de Sales, Elizabeth I, Charles Borromeo and many others. As such, the source documents here may be the beginning of innumerable conversations that have immediate relevance to the situation in our world today. Instead of creating their own narrative for credulous students to memorize and regurgitate, these documents allow students to contemplate the big issues of the time from the inside. They also provide fodder for students to draw their own conclusions, aided by Campbell's brief introductory statements and helpful study questions at the end of each document.

Of course, such a slim book as The Rending of Christendom can only provide an appetizer for the main course of historical research into the Protestant Revolt. My suspicion is that many more students will be tempted to dive into the ocean of such scholarship after using this introduction as compared to those using traditional textbooks. Because of this, I highly recommend The Rending of Christendom for use in both traditional Catholic educational settings and homeschooling. I look forward to seeing more such resources from Philip Campbell in this same vein--he is definitely on to something.

Really, resources like this should be a staple in Catholic schools that hope to do more than simply put a thin Catholic varnish on the secular American historical narrative. Other primary source compendia which fulfill much of the same function as The Rending of Christendom include The Christian Roman Empire series and Fontes Mediaevalium series, both by Evolution Publishing. Among these, I particularly recommend The First Crusade: The Accounts of Eye-Witnesses and Participants which chronicles the history of the much maligned and misunderstood First Crusade through the eyes of those who experienced it first-hand.
Posted by Florentius at 1:45 PM No comments: