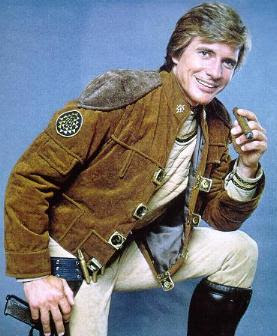 Anyone who's a child of the 1980s like I am knows who Dirk Benedict is. He was Starbuck, the hot-shot Viper pilot on the original Battlestar Galactica. He was also Face, the wisecracking, lady-killing member of the A-Team.

Well, ol' Starbuck has a few things to say about Hollyweird that made me stand up and take notice. He wrote an article called "Lost in Castration" [warning: R-rated content] that appeared recently on Andrew Breitbart's Big Hollywood site. In the article, he slams the new 'reboot' of Battlestar Galactica as having a completely different--and lame--moral tone from the original series. Benedict writes:

“Re-imagining”, they call it. “Un-imagining” is more accurate. To take what once was and twist it into what never was intended. So that a television show based on hope, spiritual faith and family is un-imagined and regurgitated as a show of despair, sexual violence and family dysfunction. To better reflect the times of ambiguous morality in which we live, one would assume.

This is something I complain about all the time. The fiction, movies, TV shows, etc. that are released today are all morally repellant. Every character is a scoundrel and one's virtue is determined by how "tolerant" he is of someone else's "differences" [assuming, of course, that those "differences" are this week's talking-points memo of acceptable beliefs or behavioral fetishes]. Perhaps that's why I spend most of my TV-hours these days watching Korean historical dramas like The Great King Sejong [This show is vastly superior to anything on American TV, btw. If you can tolerate the subtitles, check it out].

Today, another article has appeared about Benedict, this one written by Mark Hemingway of National Review Online. And man, is this article ever littered with great quotes, among them:

“Hollywood attracts people who want to be famous,” Benedict says. “It attracts people who are insecure in who they are, and their identification comes from pretending to be other people. But it’s really a profession for 14-year-olds in terms of the intellectual demands on an actor — which is why children are so good at it. It’s difficult for adults to grow up and still be a 14-year-old.”

“Even up in Montana I’ve spent the last 20 years defending the right of my boys to throw a frickin’ snowball, to climb a tree, to jump off a little cliff, to go out in the canoe off my dock without a life jacket,” he says. “All the little boys that refused to give into that were put on Ritalin. The future warriors of America are all on Ritalin in the second grade.”

“The only thing I wanted to do was raise my boys. And I’ve done it. They are a joy to behold, and they are my contribution to the world and I can die happy tomorrow because of what I’ve done,” he says. “They understand this culture that they live in. They’re equipped. I’d rather have that than 25 Oscars.”

Go read the article that puts these quotes in context. It's a beauty. I hope Dirk continues to speak out on these issues--now more than ever, voices like his are desperately needed.
Posted by Florentius at 3:12 PM No comments:

It's good to know that BC is doing such a bang-up job catechizing the students in its care in the basics of Catholic moral teaching. In a recent article in the BC student newspaper, The Heights, it was reported that 89% of the voters in the recent school-wide elections approved of a "sexual health" referendum. According to an article by Alexi Chi in The Heights, this ballot question was:

added to the ballot by a group called BC Students for Sexual Health and calls for support for affordable sexually transmitted infections testing, the availability of prescription birth control medication, and condoms on campus.

Referenda like this are a clear indictment not only of the so called Catholic identity of Boston College, but also of the cultural Catholic parents of the students who voted. One must assume that if 89% of the student body at BC votes against basic Catholic moral teachings, then:

1.) nearly 9 out of 10 students at BC are no longer functionally Catholic, and
2.) that the university itself is doing an absolutely wretched job of catechizing young people and helping them understand that giddily following the pied piper of pop culture depravity is a sure path to both earthly and eternal misery.

I am an alumnus of Boston College. BC was a moral sewer when I attended over 15 years ago. It's sad to see that little has changed--indeed, it appears that things have gotten even worse.

In years past, few parents knew that "Catholic" schools like BC had rotted from the inside out. Today, it couldn't be more clear--as referenda like this one so stunningly demonstrate. For that reason, none of my children kids will even consider Boston College when the time comes.

If you are one of the 11% of actual Catholics left in the student body at BC, I implore you: get out now. There are several excellent, authentically Catholic universities across the country who'd be happy to have you--Christendom, Franciscan University of Steubenville, Thomas Aquinas, Ave Maria University, Magdalene, and the new John Paul the Great University in San Diego, CA.

Don't waste any more of your time and money at a university that people jokingly refer to as "Jesuit, but not Catholic."
Posted by Florentius at 2:35 PM No comments: 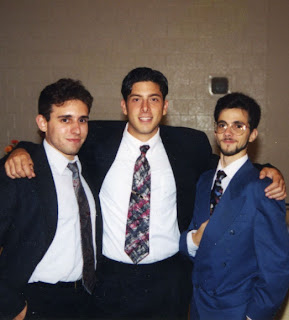 A dear friend of mine, Frank Lupo (center), passed away suddenly last week at age 37. I knew him from my high school days at St. Joseph's Preparatory school in Philadelphia and we had kept in contact over the years. The get-togethers became less frequent once we started having children, but Frank was the kind of guy who would always treat you like his best friend, even if he hadn't seen you in years. I immensely enjoyed getting together with Frank and his family and watching our children play together.

Frank was a true character--the life of any party. You knew when getting together with him that you were going to spend a lot of time laughing. But there was a lot more to Frank than just his sharp wit and his uncanny ability to come up with just the right zinger on any given occasion. Frank was also a blackbelt in Taekwando and could engage in a theoretical or intellectual conversation with the best of them. He was an absolutely voracious reader.

I always thought that we'd have more time to get together with Frank and his family as as our kids got older, but alas, God had a different plan for him. As it is, I will remember the good times we had and pray that I will be worthy to see him again some day in the Heavenly Kingdom.

Frank leaves behind a wonderful wife and three beautiful children under age 7. I ask anyone who reads this blog to:

1.) Pray for the repose of Frank's soul.
2.) Pray that the Holy Spirit comforts his wife and children in their grief.

Here is a link to the obituary.

If you feel moved by God to render assistance to the family during this awful time, contributions may be sent to: