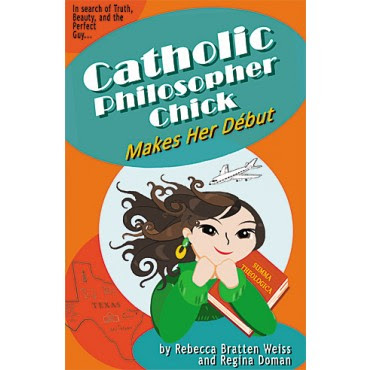 Cate Frank is a young woman in her early 20s. She's into fashion, makeup, guys and Thomas Aquinas. Wait, what? Yes, you heard right. Cate can talk Louis Vuitton or the Summa Theologica with equal facility. She's a convert to the Catholic faith from eastcoast secularism, having lived life in the fast lane in Manhattan for a few years after college. But now Cate has moved on to a higher calling and is pursuing a graduate degree in philosophy--scholastic philosophy--at Franciscan...I mean, Dominican University of Houston. There, she will plumb the challenging depths of Thomistic thought, particularly with regard to the Dumb Ox's view of women, while at the same time navigating the equally dangerous shoals of campus relationships.

Allow me to say up-front that on the surface, this is not my kind of book. I like action. I like apocalyptic wars between good and evil. I like battle-axes and chain-mail, M-1 carbines and P-40 Warhawks, lost causes and martyrdoms. My kind of books have titles like Angels in Iron or Crown of the World or Citadel of God. That said, I found myself enjoying Catholic Philosopher Chick quite a bit more than I thought I would. The writing is very crisp and bouncy. The story has a nice flow to it that kept me engaged, aided by the amiable first-person narration of the main character. Cate comes across as very likeable and real, despite her penchant for dropping fashion brandnames faster than plaid shirts in the clearance aisle at Walmart. One sympathizes with her various trials which, I imagine, will resonate most strongly with young women who are clearly the primary audience for this book.

What I appreciated most about Catholic Philosopher Chick, however, was the genuine effort on the part of the authors (newcomer Rebecca Bratten Weiss and Regina Doman of Angel in the Waters and the Catholic Fairy Tale Novels fame) to adapt for a Catholic audience the contemporary style of writing popular in secular mass-market adult fiction. They did this successfully without succumbing to the trashier aspects of the genre and what's more, managed to seamlessly work in a discussion of Thomistic philosophy which, I imagine, will be alien to a vast majority of those who read this book. That's all to the good, if you ask me. In the end, the authors have created an amusing, fun and very upbeat little book sure to appeal to their audience of young women ages 16 and over.

Finally, though we're told that one should never judge a book by its cover, I thought the cover art for Catholic Philosopher Chick was unique, engaging and a perfect complement to the text.Well done!
Posted by Florentius at 4:39 PM No comments: 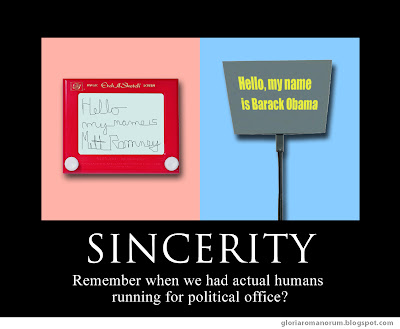 My feelings on the 2012 presidential race in a nutshell. I'm not going to vote for either Romney or Obama. For the first time in my life, I'll be pulling the lever for a third party candidate for president. The question is, which one?
Posted by Florentius at 9:52 PM No comments: