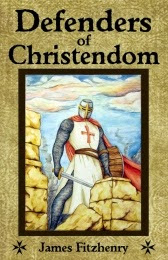 Quick quiz: You are Catholic, correct? How many of the following can you identify?

Can you identify any of them? Do you know when they lived or what they did? Why not? My excuse is that my 12 years of Catholic education was woefully deficient in teaching me much about actual Catholic history. What's yours?

In any event, every one of these men was called by God to play a particularly heroic role in preserving the Christian world. If not for their courage and sacrifice, it's not much of a stretch to say that most of us would not be Catholic today. In fact, it's likely many of us would never have existed at all.

Sadly, we live at a time when American civic leaders at the highest levels speak with profound ignorance about the Crusades and Catholic history in general. They are only able to get away with such statements because American Catholics have largely forgotten their patrimony. Defenders of Christendom by James Fitzhenry aims to remedy this deficit, offering an engrossing and enjoyable journey to the days when men "cared less about death than about shame" and were wiling to sacrifice everything to defend the helpless, particularly from the drawn sword of Islam.

Following on the heels of two outstanding previous efforts in the same vein (see also El Cid: God's Own Champion and Saint Fernando III: A Kingdom for Christ), Fitzhenry has done a remarkable job making the Crusading era approachable for modern youth. Though very much a history book, it is written in a narrative style that is far from boring. Including about a dozen spot illustrations, Defenders of Christendom is probably best suited for young people ages 10 and up, but I found it to be an engaging and educational read as a parent of kids that age. I particularly appreciated the way Fitzhenry cited the historical works he consulted throughout the text, giving me a pathway back to his original sources, one of which was very familiar: Krey's The First Crusade: The Accounts of Eye-Witnesses and Participants.

What made Defenders of Christendom most compelling, though, is the immediate parallels that jump to life of their own accord between the Crusading era of the Middle Ages and our own time, when militant, barbaric Islam has risen from the crypt to prey upon innocent Christians without pause or pity. For example, in chronicling the bloody reign of the Islamic conqueror Tamerlane, Fitzhenry describes an incident in India when Tamerlane "ruthlessly ordered the slaughter of hundreds of thousands of helpless captives that he thought of as nothing more than 'food for the sword.'" It is hard to read such words and not immediately flash to the massacres inflicted upon men, women and children in Iraq and Syria today for the heinous crime of following Christ. One must pray that God will raise up Hunyadis, Skanderbegs, and La Valettes in our present generation to meet the modern challenge from both barbaric Islam and hedonistic secularism, and revivify the dream of a unified Christendom.

If you or your kids enjoyed Angels in Iron by Nicholas Prata or Crown of the World by Nathan Sadasivan or my own books on Belisarius, you will find this book right in your wheelhouse.
Posted by Florentius at 11:58 PM No comments: