Chesterton: Without the family we are helpless before the State. 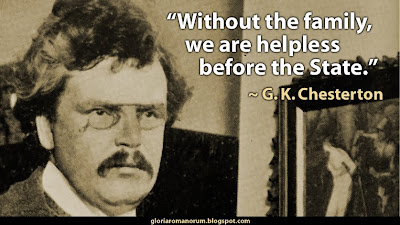 "Without the family we are helpless before the State."

Taken from the endless font of Catholic wisdom, Gilbert Keith Chesterton. Here is the quote in context:

The masters of modern plutocracy know what they are about. They are making no mistake; they can be cleared of the slander of inconsistency. A very profound and precise instinct has let them to single out the human household as the chief obstacle to their inhuman progress. Without the family we are helpless before the State, which in our modern case is the Servile State. To use a military metaphor, the family is the only formation in which the charge of the rich can be repulsed. It is a force that forms twos as soldiers form fours; and, in every peasant country, has stood in the square house or the square plot of land as infantry have stood in squares against cavalry. How this force operates this, and why, I will try to explain in the last of these articles. But it is when it is most nearly ridden down by the horsemen of pride and privilege, as in Poland or Ireland, when the battle grows most desperate and the hope most dark, that men begin to understand why that wild oath in its beginnings was flung beyond the bonds of the world; and what would seem as passing as a vision is made permanent as a vow.

Taken from: The Superstition of Divorce.
Posted by Florentius at 1:21 PM No comments: