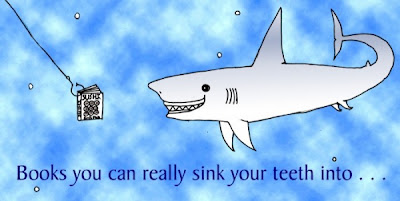 Here's a site that's been put up by a dear family friend who has just gone off to college. The purpose of the site is to be a resource for Catholic parents who are looking for quality reading/viewing/listening material for their kids. Here's what the site's creator says in her own words:

I am a homeschool graduate, a compulsive doodler, an aspiring author, a Catholic, and a lover of nature, literature and science.

I am also a student at an authentically Catholic college and I set up this website to help me actually afford to go! Each time you buy something on this site, I get a commission. I've selected books, movies, and music that I have enjoyed or have some way helped in my spiritual development. I hope you like them too!

So check it out. If you have kids, the stuff she has listed on here is gold--I know, because I've seen and read most of it myself! Plus, you'll be helping to put a very worthy and excellent young woman through a real Catholic college.

And one trick--if you click through one of her links that leads to Amazon.com and buy something there that's not on her list, she still gets a commission on it. So I've made it a point to click through the Literate Octopus every time I buy something on Amazon. It's a really easy way to lend a hand to a very deserving person.
Posted by Florentius at 1:09 PM No comments:

(This is an article I wrote back in March for the 2009 issue of the Tarpeian Rock literary magazine. Just getting around to posting it now. I'm a little behind schedule...)

This past November, the major news outlets triumphantly reported that Barack Obama’s victory in the presidential elections was due in no small part to the “youth vote”. The Chronicle of Higher Education reported that over 68% of voters age 18-29 cast their ballots for Obama.

For many outside that age bracket, this was seen as a disheartening turn of events. Ridiculous optimist that I am, however, I choose to see the glass as 32% full.

Even the more honest Obama supporters will openly admit that their candidate was the recipient of the most massive deluge of media-driven idol worship in American history. Yet, despite this, millions of young Americans were able to slice through the hype and vote against Obama.

Of course, within the first few months of his administration, Barack Obama has turned out to be every bit as divisive and retrograde as his critics warned he would be. His solution to every problem we face is not just big government, but colossal government. What those young voters who came out so strongly for Obama don’t yet realize is that the bill for the trillions upon trillions of dollars in government spending that Obama has already proposed will fall squarely upon them. They effectively voted themselves a gigantic promissory note.

On the issue of life, Obama has already been a catastrophe. During the campaign, he famously pronounced that he wouldn’t want to see his daughters “punished with a baby” and declared that the question of when human life begins was “above his pay grade.” Yet his supporters piously assured us that Obama cared deeply about the unborn and that his policies would actually reduce the numbers of abortions.

Anyone who voted for Obama thinking he was pro-life is eating a big crow sandwich now. Among his first acts as president was a repeal of the Mexico City policy which forbade US taxpayer dollars from funding abortions in poor countries.

Worse, Obama supports FOCA, the ill-named Freedom of Choice Act. If this travesty becomes law, every hard-fought restriction on abortion would be swept away—including the right of parents to be informed when their minor child attempts to procure an abortion and the right of doctors not to perform them.

Abortion has claimed the lives of nearly 50 million “youth voters” since 1973. One would think that outlawing this hideous practice would be a major priority for the fortunate survivors.

Finally, there’s the issue of the recently passed GIVE Act, part of which authorizes the federal government to determine the feasibility of a “mandatory service requirement for all able young people.”

There’s a word for government-imposed “mandatory volunteerism”—serfdom. I don’t think many young people voted for that when they pulled the lever for Obama. An excellent take on Obama’s “youth service corps” was filmed by students at John Paul the Great University entitled “Who do you serve?” I encourage you to check it out on YouTube:

But what do I know? I’m an old guy. Pretty soon, most of these issues won’t even affect me directly anymore. I’ll be too old to worry about procreating. I’ll be collecting government entitlements, while all those Obama-voting youth will be paying massive taxes required to keep said programs afloat. And I’ll be too decrepit to be drafted into some government-run youth slavery program.

If youth voters want real change, you’re not going to get it voting for a guy who has repackaged failed socialist ideas from the mid-20th century and slapped his own personality cult seal of approval on them.

And a politician who gets 100% ratings from the abortion industry isn’t peddling hope, for without life, there is no hope.
Posted by Florentius at 6:55 AM No comments:

On the other hand...

Here's a review of another book which purports to deal with the life and times of Constantine: The Age of Constantine the Great by Jacob Burckhardt.

Don't bother with this one. Burckhardt was a 19th century academic with an ax to grind against Constantine and a mission to rehabilitate the Christian-persecuting Diocletian. He pursues both of those ends with blind and tedious enthusiasm.

The book takes about 240 pages just to get to Constantine at all, as Burckhardt loses his focus amid 60 page digressions on pagan practices in the ancient Mediterranean world.

Perhaps most annoyingly, the modern translator has seen fit to strip out all of Burckhardt's references which makes the book into an unverifiable manifesto as opposed to a serious scholarly work.

There are much better and more accessible works out there on Constantine and his times than this one, such as Constantine and the Christian Empire mentioned below, just to give one example. Or, if you prefer to go straight to the primary source, try: The Life of the Blessed Emperor Constantine: From AD 306 to 337 (Christian Roman Empire Series, vol. 8).
Posted by Florentius at 1:12 PM No comments: