This Day in Late Roman History...January 27

On this day in the year of our Lord 483, the relics of St. John Chrysostom were transported to Constantinople thirty years after his death. Known as a powerful and persuasive preacher, St. John, had been patriarch of Constantinople where he made a habit of speaking the truth to power in the most stark and antagonistic terms. He reserved some of his most biting criticisms for the elites of the Empire, including the Empress Eudoxia herself. His homilies soon gained him the ire of the imperial court and raised up numerous enemies within the Church as well. On two occasions, St. John was deposed and driven from the city. He died in exile in AD 407. A full biography of St. John may be found on NewAdvent.com.

Here are a few quotes:

"Remember, therefore, it matters not how many others sin, yours can never be justified before God, and where it is fashionable to sin it is likewise the fashion to go to hell. The choice is always yours to make."

"We should not bear it with bad grace if the answer to our prayer is long delayed. Rather let us because of this show great patience and resignation."

"Why sow where the ground makes it its care to destroy the fruit? where there are many efforts at abortion? where there is murder before the birth?...Why then dost thou abuse the gift of God, and fight with His laws, and follow after what is a curse as if a blessing, and make the chamber of procreation a chamber for murder, and arm the woman that was given for childbearing unto slaughter?"
Posted by Florentius at 2:38 PM No comments: Links to this post

This Day in Late Roman History...January 19

Exactly 1,631 years ago today, in AD 379, Theodosius was elevated to the rank of co-emperor at the age of 32. His elevation occurred only a few months after the disastrous defeat and slaughter of a Roman field army at Adrianople by the Goths. Theodosius was given the unenviable task of quelling the Gothic invasion and restoring order, all while rebuilding the shattered army. He accomplished these goals admirably.

A Spaniard by birth, Theodosius was last emperor to rule the entire Roman Empire, both east and west. As a result of his accomplishments in both the political and religious arenas, he is known to history as Theodosius the Great.

Saint Ambrose of Milan offered the following praise of Theodosius in the funeral oration offered a few days after the emeperor's death: "I loved the man, for he preferred those who told him the strictest truth, rather than the flatterers."

For more on Theodosius, have a look at the Catholic Encyclopedia's entry. The Wikipedia entry is also instructive, but as in all things wiki, read but verify.
Posted by Florentius at 1:45 PM No comments: Links to this post I have come to have tremendous love for and devotion to St. Francis de Sales of late, having recently read his Philothea. As a result, I have also become aware of his great friend, St. Jane Frances de Chantal.

Saint Jane was an amazing woman in her own right. The mother of six children, her husband was killed in a freak hunting accident when she was but 28 years old. Later, after her children had been properly provided for, she became a nun and foundress of the Congregation of the Visitation, an order which took in those with a vocation who had been rejected by other orders.

Saint Jane was also someone who suffered greatly in spirit. Saint Vincent de Paul wrote, of her:

“She was full of faith, yet all her life had been tormented by thoughts against it. While apparently enjoying the peace and easiness of mind of souls who have reached a high state of virtue, she suffered such interior trials that she often told me her mind was so filled with all sorts of temptations and abominations that she had to strive not to look within herself...But for all that suffering her face never lost its serenity, nor did she once relax in the fidelity God asked of her. And so I regard her as one of the holiest souls I have ever met on this earth”

This should serve as a great comfort to those of us afflicted by the same trials and temptations in today's world. They can be overcome, with God's grace. We must always remember to ask for it.

The website on which I found this quote also had a rather profound observation on interior anguish, which hit me right between the eyes.

It may strike some as unusual that a saint should be subject to spiritual dryness, darkness, interior anguish. We tend to think that such things are the usual condition of “ordinary” sinful people. Some of our lack of spiritual liveliness may indeed be our fault. But the life of faith is still one that is lived in trust, and sometimes the darkness is so great that trust is pressed to its limit.

Yes, trust. There's the key to getting beyond the suffering and making of it a worthy sacrifice. We need to trust that God sees our plight, loves us, and that somehow, good will come from it.
Posted by Florentius at 12:16 PM No comments: Links to this post

Today is the 1478th anniversary of the quelling of the Nika Rebellion in Constantinople. After nearly a week of rioting in which about 1/3 of the city was burnt to the ground, the rebellion ended where it had begun--in the Hippodrome, the massive chariot-racing stadium which could seat 80,000 spectators. The end result was a horrible bloodbath where an estimated 30,000 rioters were slain. Here's a link to an article I wrote on the subject a few years ago.

The one enduring result of the Nika Rebellion may be seen to this day towering above city of Istambul--Justinian’s magnificent Hagia Sophia, built over the ruins of the previous church of the same name which was destroyed by the rioters.
Posted by Florentius at 9:05 AM No comments:

Young Katie Drexel was a child of privilege. Growing up during the difficult years of the Civil War and its aftermath, Katie nonetheless experienced every comfort and pleasure that life in Philadelphia and its environs could offer. Yet although her family was extraordinarily wealthy, her parents were at the same time wonderfully devout and excellent examples of parental love, charity and personal piety.

But Katie also knew sadness. Her mother had died a mere five weeks after her birth, a fact which Katie discovered at age 12. Her dear step-mother, the only mother she had ever known, died when Katie was 25. Her beloved father followed two years later. This left Katie and her two sisters heirs to a tremendous fortune. What the young Katharine Drexel did next is the stuff of miracles--for this pretty young woman with a vast inheritance and no shortage of suitors, turned away from the world and embraced the religious life, all for the sake of Christ. And 45 years after her death in 1955, she was recognized as a saint.

Katie: The Young Life of Mother Katharine Drexel is a short but excellent book. It is particularly well suited to be read with your children. I read it aloud with my oldest daughter (age 6) who had gotten it as a Christmas gift, and I noticed that my oldest son and younger daughter were lurking around as well while we read. By the end, the whole family was listening in. The writing is done in the first person, which adds a sense of familiarity to the book, as do the dozen or so black and white photos of the Drexel family. The prose is easy and approachable so that a kid over the age of 8 should be able to handle it with no problem.

The book closes with an account of the miracle which led to St. Katharine's canonization.

The story was so compelling that we decided to take a family trip to the shrine of Saint Katharine Drexel in Bensalem, PA after we finished. As this book is only about St. Katharine's early life up to her entering the religious life, you'll need to get another one to tell the rest of the story. Fortunately, the shrine has a gift shop, so we were able to walk out with Saint Katharine Drexel: Friend of the Oppressed by Ignatius Press.

Very highly recommended!
Posted by Florentius at 2:30 PM No comments: Links to this post 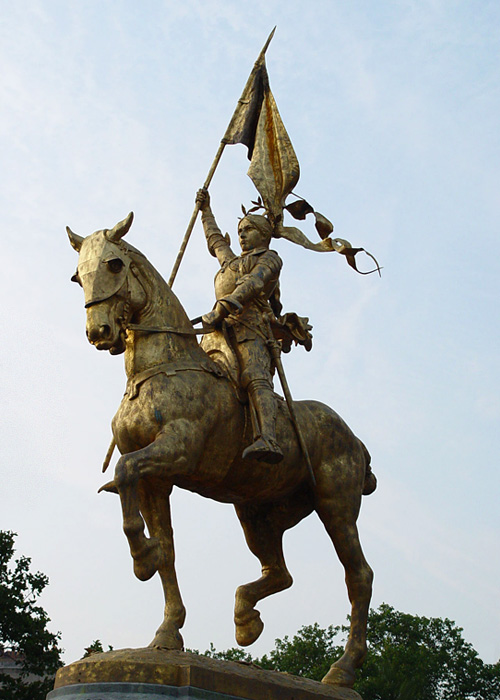 Aside from being the traditional date of the feast of the Epiphany, January 6 is also the birthday of one of my favorite saints, Joan of Arc. Here are some quotes of hers that I particularly like:

"One life is all we have and we live it as we believe in living it. But to sacrifice what you are and to live without belief, that is a fate more terrible than dying."

"Children say that people are hung sometimes for speaking the truth."

"I would rather die than do something which I know to be a sin, or to be against God's will."

Truly a model of Christian virtue and courage. Here is a link to her full bio from the 1913 Catholic Encyclopedia.

The photo is of a statue of St. Joan in Philadelphia that I have always admired.
Posted by Florentius at 12:06 PM No comments: Links to this post