Five years ago, the Supreme Court handed down a verdict in the Lawrence v. Texas case declaring that Americans have a God-given right to practice sodomy and that laws limiting the act were unconstitutional. Amazingly, by a vote of 6-3, the SCOTUS magically discovered this "right" after 227 years of American history when laws banning this disgusting practice could be found on the books of nearly every state at one point or another. Indeed, Thomas Jefferson himself, as governor of Virginia, signed a law that mandated castration as the punishment for someone convicted of sodomy.

Today, by a vote of 5-4, the Supreme Court affirmed that citizens have the God-given right to keep and bear arms as explicitly stated in Second Amendment. (Click here for the full text PDF of the decision).

Yes, that's right. Had one vote gone the wrong way, the SCOTUS would have overturned an amendment to the U.S. Constitution and taken away a fundamental individual right that has existed since the founding of the nation.

We are in big trouble in this country.
Posted by Florentius at 12:30 PM 2 comments:

$4.05/gallon gas because you voted for a Democrat

This graphic is brilliant and needs to be spread around everywhere...

The Supreme Court of the United States, in one of their patented 5-4 decisions, declared that it is unconstitutional to enforce the death penalty in case of child rape. (Warning, file is a PDF).

Yes, you heard that right. If some fiend rapes a child, he may not receive capital punishment anywhere in the United States.

Now, I agree with the Pope that capital punishment, in this day and age, is largely unnecessary. However, given the hideous facts of some of these child rape cases, I'd be hard pressed to argue that the death penalty wasn't warranted. I also understand that my opinion on this matter may not reflect that of the majority of others in this country and that folks in other states have an absolute right to decide how to govern themselves with regard to issues like this.

But in another case of usurpation of the right to self-government, the five unelected judges of the Supreme Court have taken it upon themselves to decide for the entire nation when the death penalty may or may not be applied.

The reasons for this ruling as provided by the five liberal dictators on the court are completely specious and yet another example of unelected judges not only making law from the bench, but pontificating on morality as well. As Justice Alito wrote in dissent:

The Court provides two reasons for this sweeping conclusion:

First, the Court claims to have identified “a national consensus” that the death penalty is never acceptable for the rape of a child;

Second, the Court concludes, based on its “independent judgment,” that imposing the death penalty for child rape is inconsistent with ‘the evolving standards of decency that mark the progress of a maturing society.’”

Am I the only one who feels just a bit uncomfortable with individuals like Justices Stevens, Bryer, Ginsberg, Souter, and Kennedy defining our national morality?
Posted by Florentius at 11:07 AM 1 comment:

Our tolerant friends on the left 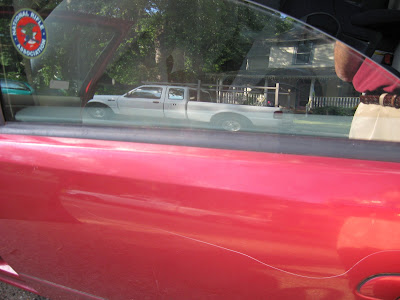 Can you figure out how this scratch mysteriously appeared on my car in the visitor parking lot at Bryn Mawr College?

Extra credit if you can figure out why.
Posted by Florentius at 5:44 PM 4 comments:

Here's an amusing story about the patron saint of environmental movement, Al Gore.

Energy Guzzled by Al Gore’s Home in Past Year Could Power 232 U.S. Homes for a Month

Remember, when the left moans about America's "profligate" energy consumption, they're talking about the rest of us not them. Most of our enlightned leaders have no intention of ever walking the walk.

I'm reminded of General Secretary Leonid Brezhnev. As leader of the worker's paradise of the Soviet Union, where the vast majority of the proletariat lived in a state of scarcity and want, Brezhnev nonetheless managed to accumulate a collection of antique cars.
Posted by Florentius at 9:24 AM 1 comment:

Ireland is oppressed by the forces of Elizabeth, the English queen. A few strongholds in the far northwest remain free of English domination, but Elizabeth has her eyes on these as well. In order to subdue Donegal, the English kidnap prince Hugh O'Donnell, heir to his ailing father's castle and lands, and lock him in prison in Dublin.

Red Hugh: Prince of Donegal tells the tale of Hugh's imprisonment, attempts to escape, and his heroic fight against the English. It is engagingly written and is a quick and satisfying read. The characters are very well drawn--from the brave and long-suffering Hugh, to the indomitable Queen Ineen Duive, Hugh's mother; from the brawny and charming MacSweeney to the cruel English captain Leeds.

Originally published in 1957, this new edition of Red Hugh is produced with modern audience in mind. It includes a useful map of northern Ireland which allows the reader to follow the action with ease. The book is well suited for kids aged 10 and up, though I admit to enjoying it myself at over thrice that age. The primary lessons taught are bravery, loyalty to family and country, and perseverance even in seemingly hopeless situations.
Posted by Florentius at 12:06 PM No comments:

President Bush to convert to Catholicism???

Somehow I doubt it, but an article in the London Telegraph today is hinting at it.

Keep in mind, however, that for The Telegraph, anything having to do with the Catholic Church or (gasp!) the Pope is considered evil, bad, wicked, pernicious, etc. So in my opinion, this is nothing more than an opportunity to bash President Bush.

That said, if Mr. Bush were to convert, I'd welcome it! He's proven to be a fairly lousy politician, but I always thought he was effective when it came to testifying about his faith in Christ.
Posted by Florentius at 9:04 AM 3 comments:

Obama on US energy independence -- No we can't!

Here's the latest in a series of graphics I'm working on to educate people about Barack Obama. 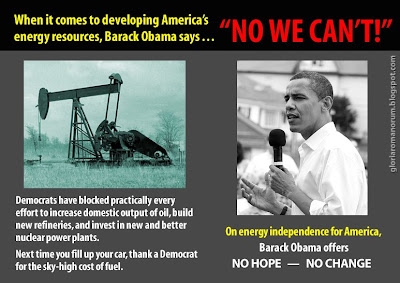 Please feel free to steal this if you think it's useful.
Posted by Florentius at 11:40 PM 2 comments:

Defend the Family in California

California, the state that wants to mandate homosexual education for children and outlaw homeschooling is at it again. This time, the black-robed dictators on the California Supreme Court have issued a mandate saying that the state must recognize "marriages" between two men or two women. This is in direct contradiction of a voter initiative banning such phony marriages which passed 60%/40% some years ago.

The voters in California aren't taking this lying down, however. And as this issue has the potential to affect ALL of us via the Full Faith and Credit clause of the US Constitution (phony marriages in CA will have to be recognized in other states), we need to support the good, upstanding Californians who are fighting this battle. Here are two websites to check out:

We can either work now to defeat this assault on our traditional values, or else wait and be forced to fight the battle in our own backyards in a few years.
Posted by Florentius at 12:40 PM No comments: