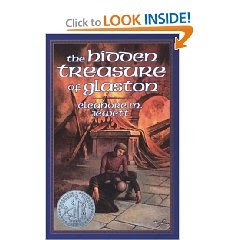 Young Hugh is the lame son of an English nobleman--and not just any nobleman. Hugh's father was one of the murderers who struck down Archbishop Thomas Becket. Forced to flee the country, Hugh's father leaves his 12-year-old son in the care of the studious monks of Glaston abbey. Hugh soon discovers, however, that prayer, bookbinding, and care for the poor aren't the only things that engage the inhabitants of Glaston. Mystery abounds and Hugh, the oblate Dickon, and the hermit Bleheris, are soon caught up in a quest for a magnificent treasure hidden for hundreds of years.

The Hidden Treasure of Glaston is a lovely little tale, written in pithy, flowing prose that will easily hold the attention of even the most distracted reader. Written by an author who is obviously comfortable in her historical milieu, the story offers abundant positive messages for both young readers and old, chief among them being the importance of forgiveness and the virtue of detachment from material goods.

Well-suited for kids ages 10 and up, the book is also a quick and easy read for adults. It is a good one to read and discuss with your kids and can serve as an introduction to the history of medieval England and the monastic life that dominated Christendom at a time when Europe actually possessed a culture it wasn't ashamed of. Highly recommended.
Posted by Florentius at 10:44 PM 1 comment:

There's at least one member of MLK's family that got some of the slain civil rights leader's courage.

Alveda King placed 1,400 flowers in front of the White House today, in honor of the estimated 1,400 Black babies that will be slaughtered today thanks to legalized abortion. In a LifeSite News article, King was quoted as saying:

"Over 45 years ago, my Uncle, Dr. Martin Luther King, Jr., wrote from a Birmingham jail cell that ‘[i]njustice anywhere is a threat to justice everywhere.’ Today, there is no greater injustice than that suffered by the 4,000 babies, 1,400 of them black, who die on any given day at the hands of abortionists."

Ms. King has put her finger on a issue that many in the major media, and even in the so-called Conservative media, won't touch with a 20-foot pole--the connection between abortion, racism, and the suppression of minority groups.

When it is mentioned at all, this subject is usually presented by abortion advocates in coded language, i.e., "If not for abortion, crime would be way up." But I got to witness the reality of the situation close up yesterday while praying in front of an abortion mill. The clinic, located in a predominantly wealthy White suburb was doing a brisk business. And of the 20 or so cars that I saw entering and leaving the parking lot, only a single one had White people inside it. The rest were piloted by various members of the 'rainbow coalition'--the majority were Black. Does this happen by accident? I don't think so.

The irony that the first Black president is also the most pro-abortion president in history could not be more tragic. His policies will directly encourage more people of his race to destroy their own children. I pray that my Black brothers and sisters in Christ will open their eyes to this hideous fraud.
Posted by Florentius at 1:33 PM No comments: Links to this post

Cyclopædia of Universal History Being an Account of the Principal Events in the Career of the Human Race, from the Beginning of Civilization to the Pr

Cyclopædia of Universal History Being an Account of the Principal Events in the Career of the Human Race, from the Beginning of Civilization to the Present Time ... By John Clark Ridpath: " 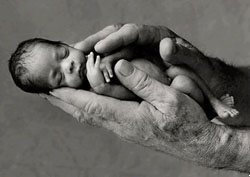 The secular media has made an annual tradition of ignoring one of the largest protest rallies in the nation--the March for Life which takes place every January 22. Apparently, 200,000 people marching on the National Mall isn't news if their cause isn't one the elite media agrees with.

That's where media outlets like EWTN are so valuable. They will be broadcasting the March live. Here's an excerpt from their press release:

With President-elect Obama promising his first act in office will be to sign the Freedom of Choice Act and the U.S. Conference of Catholic Bishops vowing to aggressively oppose this, the 2009 March for Life could be one of the biggest and most important in history.

EWTN will offer viewers the most complete coverage available on any platform of both Washington, D.C.’s March for Life and San Francisco’s Walk for Life. Coverage of the Jan. 22 events will include live Masses, walking processions, rallies, interviews, panel discussions, and speeches from pro-lifers around the country.

You can also watch or listen to these historic events live on our website at www.ewtn.com/audiovideo). Further resources can be found at www.ewtn.com/prolife. But that’s not all.

Posted by Florentius at 1:50 PM No comments: Links to this post

What do you call it when those in the so-called "free press" see their responsibility as primarily to exalt and defend our elected leaders?

Hat tip to Newsbusters for finding this.

Here's what Chris Matthews said back in November in the aftermath of Obama's electoral victory:

Yeah, well, you know what? I want to do everything I can to make this thing work, this new presidency work...My job is to help this country.

Sure, Chris. Just like you wanted to help this country when Bush was president by trashing him every opportunity you got.

Now, we've got Tavis Smiley saying something very similar on Morning Joe: "We're all working for Barack Obama," Smiley said, "we have to help make Obama a great president."

So there you have it. Any pretense of impartiality is out the window. The next four years are going to witness some of the most crass and outrageous regime-inspired propaganda the world has ever seen.

Obama has already shown himself adept at creating strange government offices that never existed before in American history. Given his giddy approval of government take-overs of failing industries, and the precarious financial situation of much of the American media, one wonders how long it will take the Great Obama to nationalize the media and rename it the Ministry of Propaganda.

At this point, that would be a more fitting appellation.
Posted by Florentius at 12:11 PM No comments: Links to this post

Yet another northeastern diocese is planning to close and consolidate a large number of Catholic churches. This time, it's Albany which for the past 32 years has been withering under the inept rule of Bishop Howard Hubbard. According to an article in the Times Union, roughly 20% of the parishes in Hubbard's diocese would be closing. Fortunately, the good Bishop has assured everyone that the abandoned churches would be sold and put to good use:

First preference, Hubbard said, would go to religious uses. Second would be nonprofits, and third would be the commercial sector.

"Religious uses"? Like what? I'm sure there are some folks who get a nice warm fuzzy feeling when they think of a lovely old Catholic church serving as a mosque or a Mormon temple, or a church of Scientology--but I'm not one of them.

Who's to blame for this disaster? Well, the Times Union seems to be blaming demographics:

Albany, like other dioceses across the Northeast, is grappling with urban flight and a shortage of priests. Since 1960, the city of Troy has lost 34 percent of its population, Albany declined 27 percent, and Schenectady dropped 25 percent.

There are many reasons for urban flight--high taxes, crime, bad economy, etc. I don't know Bishop Hubbard's record on these issues but there's little he can practically do about them. But I do know for a fact that Hubbard has done an exceptional job driving devout Catholics out of his diocese. And let's face it--if a bishop has been in control of a diocese for over 30 years, he has no one to blame but himself if 1.) vocations are almost nonexistent and 2.) Catholics are leaving the Faith in droves.

In short, Bishop Hubbard's excruciatingly long tenure has been an abject failure by any appreciable measure. And this round of closings is the logical conclusion of his failure to uphold and teach the Catholic Faith.

It's long past time for Catholics to start demanding accountability from their bishops. In my opinion, if a bishop has reigned for 10 years and his diocese is still a mess in terms of the faithful leaving the Church and shortage of vocations, he should be forced to resign.

Bishop Hubbard's efforts have been like those of the servant who buried his talent in the ground, to whom our Lord would say:

Wicked and slothful servant, thou knewest that I reap where I sow not, and gather where I have not strewed...Take ye away therefore the talent from him, and give it to him that hath ten talents. For to every one that hath shall be given, and he shall abound: but from him that hath not, that also which he seemeth to have shall be taken away. And the unprofitable servant cast ye out into the exterior darkness. There shall be weeping and gnashing of teeth.

Hubbard should resign immediately before he does any further damage, and his diocese should be given to a prelate who knows how to increase the harvest of souls.
Posted by Florentius at 4:20 PM 2 comments: Links to this post

A dog returning to his vomit

The Obama administration is already looking like Clinton redux, so one would expect that among the first things our fearless leaders will do is demand that our armed forces enlist "out and proud" homosexuals. Of course, they won't do it as ham-fistedly as Bill Clinton did in 1992, but if you put your ear to the ground, you can already hear the wardrums beating on this issue.

As our leftist overlords won't be able to resist this opportunity for institutional deconstruction, I'm am taking the moment to post the inevitable outcome of such a move. In a "gay friendly" military, expect many more incidents like this one: Colonel Discharged Over Homosexuality [NY Times, July 27, 1997].

In brief, according to this NY Times article, Lt. Col. Loren S. Loomis, a bronze star recipient then age 50, was dishonorably discharged after his house burned down. The discharge was enforced after firefighters discovered that Col. Loomis had videotapes of himself engaging in sex acts with other men.

Not exactly. Col. Loomis's house was set on fire by a 19-year-old Army private. Why? Because Loomis had taken nude photos of the private and the young man had burned the house down in an attempt to destroy the pictures in Loomis's possession.

Does this sound like the kind of distraction/fraternization we need in the military? Does anyone doubt that allowing open homosexuals to serve will result in a proliferation of this kind of behavior?

If you do, you might want to refer your opinion to the Catholic Church. Not too long ago, our bishops thought it would be a good idea to allow homosexuals to become priests....
Posted by Florentius at 2:49 PM 2 comments: Links to this post