Deo gratias! The cause of Venerable Archbishop Fulton J. Sheen appears to be moving forward again after his earthly remains were removed from Babylon-on-Hudson to Peoria, Illinois.

With the renewed interest in Archbishop Sheen, I noticed an up-tick in folks sharing some of my oldest memes on social media, including the one above.

This quote may be found in Sheen’s book entitled, Life is Worth Living, which the same title as his celebrated TV show from the 1950s. The reason for this is not coincidental. The essays in the book were transcribed from the TV show. As Archbishop Sheen wrote in the preface with his typical good humor:


“Let it never be said again that it is difficult to write a book. It is now proven that if a person talks only half and hour a week for twenty-six weeks, he already has enough material for a book.”

Here is the context of the quote, from a section in the book entitled, Knowing and Loving:


The will, when it loves anything above it in dignity, goes out to meet the demands of whatever it loves. When the will loves anything that is below it in dignity, it degrades itself. Suppose the dominant love of man was money. Man would degrade himself by loving what is less worthy than himself. In loving it, he becomes like gold. If a man loves only lust, carnality, and the pleasure of the flesh above all things, he thereby degrades his spirit to the level of sex.

We become like that which we love. If we love what is base, we become base; but if we love what is noble, we become noble. Hence the importance of the right kind of ideals and the right kind of heroes. As Our Lord said, Where your treasure is, there is your heart also. “Hence, the least love of God is worth more than the knowledge of all created things. [Sheen: Life is Worth Living, page 47]

This passage is immediately followed by another that is eminently quotable and to which I previously gave the meme treatment as follows: 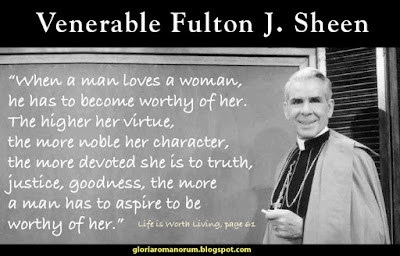 Here are a few more Sheen posts from the archives:

Posted by Florentius at 2:40 PM