The Shack ~ Heretical literary awfulness comes to the big screen 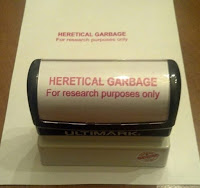 So apparently they've made a movie out of The Shack. This is not a surprise. If any novel was specifically written to be made into a really bad film, this was the one.

I have not seen the film and have no intention of seeing it. But since the marketing campaign for it has penetrated Catholic media, I recall that I had written a review of this piece of literary detritus about seven years ago when it was at the height of its ill-deserved popularity. That review may be found here in full, but the key points of my criticism were as follows.

The primary problem with The Shack is that the author takes the outrageous liberty of writing long passages in the voice of God, Jesus, the Holy Spirit, and a personification of Wisdom (the Quadrinity?). Doing so in a work of fiction is fraught with peril even when such dialogue is scrupulously aligned with Sacred Scripture and Church tradition. Needless to say, William Young, the author of The Shack, has no such scruples.

When reading The Shack, we learn:
Are you getting the gist yet? My conclusion in the original review is that The Shack was meant specifically for rich Americans who desire to reconcile a depraved lifestyle with an external embrace of Christianity. Seven years later, I don't feel compelled to revise that assessment.

Interestingly, the supernatural being known as "Lucifer" does not make an appearance in The Shack. The reason for that omission seems obvious. On that note, I would recommend that anyone who is tempted to read The Shack, or watch the movie, would be better served by reading The Screwtape Letters instead.