The "Gloria Romanorum" Medallion of Justinian 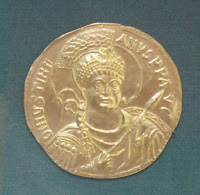 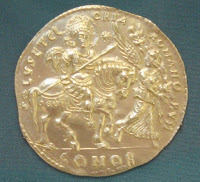 Here are two photos taken at the British Museum in 2011, featuring the obverse and reverse of an electrotype replica gold medallion which was struck during the reign of Justinian I. The original coin was stolen from Cabinet des Médailles of the Bibliothèque Nationale de France in 1831 and has been lost ever since. This representation is a reproduction made from a sulfur cast taken before the medallion was lost.

The Dictionary of Roman Coins of 1889 describes this medallion as follows:


Distinguished not only by its unique character but also by its unusual volume and weight (for, according to Eckhel), it equals five ounces and nearly three drachms, and Mionnet gives its diameter as 38 lines (French measure), this splendid coin was found in the year 1751, near Caesarea ad Argaeum (Mazaca), formerly the capital of Cappadocia, amongst some rubbish in the foundations of an old building, cast out from the depth of twenty feet underground.

The inscription on the obverse reads: "D. N. Justinianus P. P. Aug." or, to expand, "Dominus Noster Justinianus Perpetuus Augustus" ~ Our Lord Justinian, Eternal Augustus. The figure on the obverse is Justinian himself, carrying a lance and wearing the toupha, or feathered crown which can also be seen in drawings of the colossal Justinian statue that once sat atop a column in Constantinople.

The inscription on the reverse reads, "Salus et Gloria Romanorum" ~ Salvation and Glory of the Romans. The word "CONOB" at the bottom indicates that the original medallion was minted in Constantinople. Some have speculated that the warlike rider featured on the reverse being led by a winged victory is a representation of Belisarius, however the presence of the toupha on the rider's head, and the lack of beard, seems to indicate that it is another representation of Justinian.

Historians and numismatists have speculated that the medallion was meant to commemorate the great victory of Belisarius over the Vandal Kingdom in AD 534.
Posted by Florentius at 2:44 PM