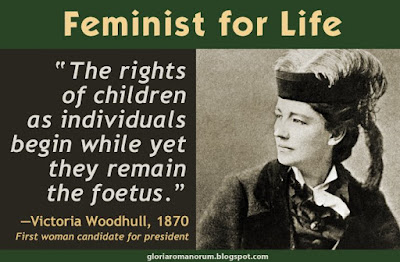 "The rights of children as individuals begin while yet they remain the foetus." ~Victoria Woodhull in Woodhull and Claflin's newspaper, 1870.

This meme may be shared on Facebook by clicking here.

Victoria Woodhull was an early crusader for women's rights in the United States. Though seriously misguided on a host of moral issues, she yet understood the inherent wickedness of abortion, writing in a later editorial in the same periodical:


"Every one will concede that it is murder to take the life of a human being. But the very pertinent question arises just here, when does human life begin? The beating of the heart, modern science tells us, never begins; that is to say, there is no time in the whole process of the growth of the human body from the moment of conception until death, that pulsations of life are not present in what is to develop into the perfected body. Where, then, shall the line be drawn, on one side of which it shall be murder to cause these pulsations to cease, and upon the other not murder?

...Many women who would be shocked at the very thought of killing their children after birth, deliberately destroy them previously. If there is any difference in the actual crime we should be glad to have those who practice the latter, point it out. The truth of the matter is that it is just as much a murder to destroy life in its embryotic condition, as it is to destroy it after the fully developed form is attained, for it is the self-same life that is taken.

...[T]hey who, having conceived [children] then destroy them, are murderers; and no amount of sophistry nor excuses can, by one iota, mitigate the enormity of the crime. They do even more than murder, they virtually commit suicide, for no woman can practice this crime without in part destroying her own life.

...[W]hile we shall at all times freely discuss the matter, objectively as to its results, we shall not forget to look at the matter subjectively, to find the remedy, which, if we mistake not, is in granting freedom and equality to woman."

[NB. I've fallen behind on posting these, opting instead to post to my Facebook page first where they inevitably get more play. Like me on Facebook if you want to see these earlier and share them with your friends.]
Posted by Florentius at 11:28 AM