January 20 ~ Martyrdom of Pope Saint Fabian, victim of the persecution of Decius 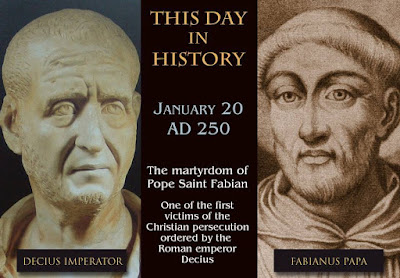 On this day in Roman history - January 20 - Pope Fabian, the bishop of Rome, was martyred.

In AD 250, the Roman emperor Decius decided that the disasters afflicting the empire were the result of impiety to the gods by the people. To address this issue, Decius decreed that all Romans should publicly offer obeisance to the gods. Any who resisted this command were to be severely punished.

Since Christians steadfastly refused to be bound by this imperial mandate, Decius struck their leaders first. One of the first victims of this persecution was Fabian, the Pope of Rome. It is thought that he perished a martyr while in prison, though a tradition exists that he was beheaded. The Liberian Catalog records that he was martyred on January 20, 250.

Following is Pope Fabian's record from the Liber Pontificalis, first compiled in the 4th century:


Fabianus, by nationality a Roman, son of Fabius, occupied the see 14 years, 1 month and 10 days. He was crowned with martyrdom.

He was bishop in the time of Maximus and Africanus (AD 236) until the year when Decius was consul the 2nd time and Quadratus was his colleague (AD 250), and he suffered January 29.

He divided the districts among the deacons and created 7 subdeacons to be associated with the 7 notaries, that they might faithfully compile the acts of the martyrs, omitting nothing. And he commanded many buildings to be erected throughout the cemeteries.

And after his passion, Moyses and Maximus, priests, and Nicostratus, a deacon, were seized and committed to prison. At that time, Novatus arrived from Africa and drew away from the church Novatian and certain confessors. Afterwards, Moyses died in prison, when he had been there 11 months, and therefore many Christians fled to divers places.

He held 5 ordinations in the month of December, 22 priests, 7 deacons, 11 bishops in divers places. He also was buried in the cemetery of Calistus on the Via Appia, January 20. And the bishopric was empty 7 days.

The persecution under Decius was one of the severest trials the Catholic Church had experienced up to that point. It is thought that thousands were killed, and thousands more publicly renounced their faith to avoid death.
Posted by Florentius at 9:21 PM