Legalizing Marijuana is a Terrible Idea 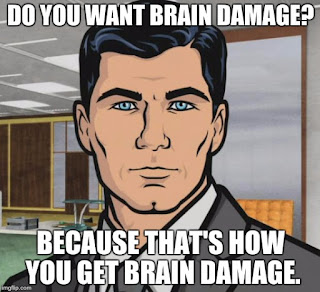 It seems that many states, my home state of New Jersey included, are hell-bent on legalizing recreational use of cannabis. The arguments in favor of this, though loud and dominant in the media, are not particularly convincing.

Most of the advocates tout the desire to legalize the drug so that the state can raise additional tax revenue off of the sales. Enhancing the ability of an over-bearing confiscatory high-tax state like New Jersey to extract even more revenue from its citizens is never going to be a compelling argument for me.

Slightly better is the argument that legalizing the drug will result in fewer individuals in prison for usage. While I agree that we have far too many individuals in jail for such petty crimes, full-scale legalization of recreational usage seems like an over-reaction to a problem which may be fixed by simply reducing the penalties involved.

But the absolute worst argument in favor of legalization is that cannabis is harmless or somehow beneficial to users. You will find these types of claims all over websites which market marijuana-related products, and they are absolutely false and extremely dangerous. If there are any mild benefits for a healthy person using cannabis, they are far outweighed by the negatives. Sadly, the proponents of marijuana usage will often laugh off any suggestion that using their drug of choice can do harm as a return to "Reefer Madness," a supposedly comical early 20th century belief that using cannabis can cause you to go crazy.

The sad facts are these: the more research that's done, the more science has realized that cannabis usage for healthy people is detrimental, both on a personal neuro-cognitive level, and on a societal level. It is particularly bad for youth as the impact of the active ingredient in cannabis--tetrahydrocannabinol or TCH--on the developing brain can be profound and long-lasting. Here is a list of articles detailing some of these findings. I would encourage anyone interested in this issue to at least skim over these studies:

Cannabis as a Neuro-Toxin:
Impact of Cannabis on Memory
Impact of Cannabis on Executive Function
(Note: Executive function is the set of mental skills that govern time management, attention, planning and the ability to cope with multiple tasks at the same time.)
Impact of Cannabis Usage on the Developing Brain
Societal Impact of Cannabis Legalization
While the above articles are mostly from scholarly journals, here are some news stories on the impact of cannabis legalization is having on society, largely from mainstream media sources that are otherwise favorable toward legalization:
The message here is that even if voters and state legislatures are stupid enough to legalize this substance, if you care about the health of your brain, you would do well to avoid smoking weed. Fears of "reefer madness" may be overblown, but the conventional wisdom regarding the degraded behavior and reduced prospects of "pot heads" is pretty much on the money.

And let's not forget the ulterior motives of politicians and businesses who are looking to reap the benefits of legalization. Do they really care about the health and safety of the people they supposedly serve? Or are they simply looking for a way to make society more docile, stupid and ultimately easier to rule, while raking in big money? On this question, history is instructive:

A Disgraceful Little War -- The Opium War and Commissioner Lin
Posted by Florentius at 1:35 PM

A terrible idea compared to what? Compared to criminalizing use and possession by adults it is a very good idea.

Did you actually read the article? I am open to reducing the penalties for possession and use. But expanding the availability of a substance with so many negative effects--particularly on developing brains--is an awful idea.

In my opinion, the negative societal factors far outweigh any perceived benefits. But hey, it's not like we have a drug problem in this country. Better living through chemistry--or something.

Apparently, the pot trolls have come to post spam links to their websites. How cute.

More pot spam. If none of the above information convinces you that cannabis is bad for you, perhaps the fact that they can't stop themselves from spamming will.

Wow so if someone doesn't agree with your close minded pseudo-scientific view that "cannibas is bad for you" you delete them... Ask a cancer patient who smokes weed so they can eat or a person with severe anxiety who through weed has been able to give up using addictive benzodiazepines and anti depressants with far worse side effects if the "negative societal factors far outweigh any perceived benefits"...

No, Kyra. I delete comments which included links to places where cannabis-related products are sold. You know, unsolicited marketing posts--aka, spam. I don't allow that.

Though I disagree with it, your comment may stay because you made an actual point. I would simply point out that it's not me saying "cannabis is bad for you" -- it's the very numerous scientific articles cited in my original post. And I'm only scratching the surface. Look deeper yourself and the evidence is clear. If you prefer to retain a well-functioning brain throughout your life, don't use cannabis.

Again, sorry guys. If you post a comment that contains a link to a cannabis-related business, I will delete it, no matter how relevant the rest of your comment may be. No SPAM.

Some drugs need to be reconsidered. Here is a look on Marijuana Legalization. Decide for yourself after you read this.
Benefits of the Legalization of Marijuana

Whoever is giving you pot-spammers advice about how to market your business is doing you a disservice. Posting obvious spam like this just makes you look like a clueless dope. Of course, as you can read in the articles above, smoking weed negatively impacts your ability to make good decisions, so there's that.

Promoting and using a chemical substance that damages your brain is fun? Who knew?