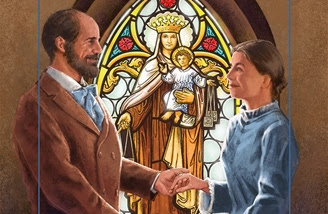 Several years ago, I attended one of the wonderful IHM Catholic Homeschooling conferences in northern New Jersey. At that event, I was privileged to hear a presentation about the newly canonized saints, Louis and Zélie Martin, the parents of St. Thérèse of Lisieux—the Little Flower. This was my first introduction to this amazing married couple who not only raised one canonized saint, but sent all four of their other daughters into the religious life. It's not far-fetched to imagine that all of these women will also be canonized in the years to come. That conference talk has always stuck with me.

At other IHM conferences—which are at present on hiatus which I pray is not permanent—I met numerous highly intelligent, motivated and inspired young people at our vendor table. One of these creative prodigies is GinaMarie Tennant. Far from being the poorly-socialized homeschooler of popular cliche, GinaMarie always made it a point to come over to our table not just to peruse the books (she did that too, thank God!), but also to chat about her various artistic endeavors. I was not shocked, therefore, when GinaMarie let me know that she had inked a contract with Ignatius Press for a book on Saints Louis and Zélie Martin as part of the Vision Series. That means that she now joins such noteworthy Catholic authors as Milton Lomask, Mary Fabyan Windeatt, and Louis de Wohl, all of whom have contributed books to this venerable series of historical novels for young Catholics over its long history.

I am pleased to report that Ms. Tennant's book, Louis and Zélie: The Holy Parents of Saint Thérèse has now published. Of course, I ordered several copies and placed one in the common area of the house for easy access. Since then, there have been a few minor debates about who gets to read it first. My mother got first dibs by virtue of age and she finished it quickly. My wife is in the middle of the book now. Even though it's meant for them, the kids will have to wait their turn.

As for me, I read it on the beach during our family vacation and it was exactly what I expected. Though slightly longer than most books in the Vision Series, it is so engagingly written that the short chapters fly by. The author did a superb job drawing out the personalities of the main characters without getting bogged down in the details of day-to-day life. I particularly enjoyed the chapters on the early lives of Louis and Zélie—the desire of each to enter the religious life and the chance meeting which led to their marriage. The chapters covering the Franco-Prussian War were also beautifully drawn and poignant, bringing the harsh reality of that forgotten conflict sharply into focus in very personal ways. Knowing the author as I do, I was not at all surprised that the book contained a wealth of historical detail that made the story particularly authentic.

Have I piqued your curiosity about this book? If so, here's a brief interview I did with the author which offers a behind-the-scenes look into how GinaMarie Tennant parlayed her home education, writing talent and strong Catholic faith into a literary work which will be read by young people for generations to come.

What inspired you to write about Saints Louis and Zélie Martin? How did you become interested in their story?

GinaMarie: Saint Thérèse has been one of my favorite saints for as long as I can remember. I was interested in her parents and purchased a few books on them. Although I had plans to write about saints, Louis and Zélie were not on my long list. My first project was a short, illustrated biography about another one of my favorite saints, Saint Notburga of Tyrol, Austria. When an editor at Ignatius Press saw it, she suggested that I write a biography on Saints Louis and Zélie Martin for the Vision Series. I was delighted with the idea, and three years later Louis and Zélie:  the Holy Parents of Saint Thérèse was published.

As I reflect on the journey behind the book, I recall one day apologizing to Saint Thérèse that I was spending time writing about Saint Notburga instead of writing about her. I explained, “There is nothing you need; so many people have written books on you already.” Little did I realize then that there was a book Saint Thérèse wanted me to write for her—a book about her parents.

Can you think of a particular anecdote from the lives of the Martins that appeared in the book that speaks particularly well to young Catholics today?

GinaMarie: There are many examples in Saints Louis’s and Zélie’s lives to which young (and not so young) Catholics can relate. In one brief episode, I mention how Louis was frequently having to tell his customers that his shop would not be open on Sundays. What I did not explain was that in his town, Sundays had become “market day” for the farmers. Friends, and even Louis’s confessor, had said it was acceptable to be open on Sundays for at least a few hours, since that was the best time for the farmers to shop. Louis refused to budge, even dismissing the suggestion that customers come in a side entrance so that his store would not be “really open.” Instead, the Martins reserved Sundays for prayer, family, and relaxation. They also avoided traveling on Sundays so as not to make others work. Of course, if they encountered someone in need it did not matter what day it was: they were there to help. What a lesson this is for us who live in a similar world where Sundays are just another day for shopping and work.

The most important lesson their lives teach us is that we can live for God through our daily lives. Louis’ and Zélie’s sanctity was not separated from their everyday lives; in fact it was precisely through their daily lives that they encountered and glorified God. It is the same for us.  We do not have to leave the world to find God. He wants to meet us where we are. Zélie, in a letter to her sister-in-law, wrote that if she only did everything for God, she would be a canonized saint. Little did she realize that someday she would be a canonized saint.

Writing a book is no small task. How did homeschooling prepare you for it? Or, what aspects of your home education helped you not only create the book, but see the task through to the end?

GinaMarie: Being homeschooled prepared me in many ways for writing this book, as well as for my profession as an organist and music teacher. My parents always encouraged my siblings and me to pursue our passions, and they tailored our curriculums accordingly. I spent a lot more time on creative writing and art than most students do since I always knew that I wanted to be an author and illustrator. I saw how much my parents gave of themselves in raising us and learned that some things worth doing in life are not easy. Writing a book for publication and then illustrating it is not easy or quick. A lot of effort, time, and faith is required in the process. I was blessed to work with a great team, but without my family’s patience and encouragement, I would not have succeeded.

Did any surprising or unexpected things happen during the writing of the book?

GinaMarie: Life is full of surprises, and when we try to do God’s will, God is able to write the story of our lives in incomprehensible and stunning ways. I marvel at how I used to read the Vision Series, clueless that someday I would write for the series. As a child, I had wanted to write biographies of saints and historical fiction. Little did I realize then how I would combine those two dreams. Since the book’s publication, I have been very surprised by how many adults are inspired by Louis and Zélie. I am sure God has many more surprises in store for the future.

While writing the book, how did you incorporate the task into your prayer life? In other words, did you change how you pray while writing this book?

GinaMarie: I reflected on everything I read about the Martins. I had already been influenced by Saint Thérèse and her writings. By reading about her family, I gained new insights on her “Little Way.” I also found that I thought about life differently. I would pray to the Martins and ask them to help me write what they wanted in the book. I told them they could delete anything they did not want in it via the editors and my sample readers. That certainly happened. Through the process the Martin family became my good friends. I hope the readers of Louis and Zélie will be inspired by them, just as I have been.

Posted by Florentius at 1:35 PM

I have written a few books now, but I don't have a major publishser yet - I would like to submit "A Catholic Postpartum" to someone - so if you know how to do that - let me know - so far I just have it self-published and another one called "Hope through sorrow" - a miscarriage "journal" book.

I just ordered the book. We visited the family house on our last visit to France, very inspiring. Also, went to Ars and visited the parish of St. John Vianney, so wonderful, small village in the countryside.