Constantine's Execution of Crispus and Fausta

As the emperor who brought Christianity out of the catacombs and into the palace, Constantine had many admirers in his own time. However, he had just as many detractors. The same holds true in our own time: for every plaudit Constantine receives from a modern commentator, one can expect to see an equal number of condemnations.

The event most commonly brought up by Constantine’s detractors when attacking his character are the scandalous executions of his second wife, Fausta, and his eldest son, Crispus. It is noteworthy that most of Constantine’s contemporary Christian biographers exclude this incident completely when recounting his life. Constantine’s detractors, however, are not so shy. Here are some examples.

The Arian Christian historian Philostorgius, writing in the early 5th century AD, asserts that “Constantine was induced by the fraudulent artifices of his step-mother to put his son Crispus to death.” [Epitome of Philostorgius's Ecclesiastical History, Book II, Chapter 4, ]

Crispus was the product of Constantine’s first marriage to a woman named Minervina about whom little is known. Constantine’s second wife, Fausta, was Crispus’s step-mother. It should also be noted that Fausta was the daughter of the western emperor, Maximian Herculius, and the sister of the Maxentius, self-proclaimed Augustus at Rome. Both Maximian (via suicide following an abortive attempt to reclaim imperial power) and Maxentius (via death in battle) met their ends due to the actions of Constantine.

The early 6th century pagan historian, Zosimus, fills in some more details, “His son Crispus, who had been honored with the rank of Caesar…came under the suspicion of being involved with his stepmother Fausta; Constantine destroyed him without any regard to the laws of nature.” [Zosimus, Historia Nea, 2.29, as translated by Hans A. Pohlsander.]

As a hostile critic of Constantine, one would expect Zosimus to put the scandal in the worst possible light. That said, a Christian chronicler, Zonaras, writing much later in the 12th century, basically corroborates him, adding additional detail either from his own speculation or sources unknown to us:


“His (Crispus’s) stepmother Fausta was madly in love with him but did not easily get him to go along. She then announced to his father that he (Crispus) loved her and had often attempted to do violence to her. Therefore, Crispus was condemned to death by his father, who believed his wife.” [Zonaras, Epitome, 13.2, as translated by Hans A. Pohlsander.]

Given the above accounts and what we know about the dynastic situation in Constantine’s household, along with the moral legislation put into effect by Constantine at about the same time, it is possible to conjecture what the actual course of events might have looked like.

In AD 324, Constantine was able to vanquish the last of his rivals, Licinius, for complete control of the Roman Empire. During this campaign, the young Crispus played a signal role having defeated the naval forces of the Licinians in two major battles. These victories formed the vital prelude to the climactic Battle of Chrysopolis where Licinius was decisively defeated by Constantine. It is no surprise, then, that following the victories, Crispus—already named a Caesar or junior emperor—was at the height of his power and well-positioned to be Constantine’s heir apparent.

Fausta, however, had borne three sons of her own by Constantine. All of them were too young to take up the purple in the year 326, the eldest, Constantine II, being only 10. In order for Fausta’s sons to succeed to the imperial throne and not be subject to their illustrious older brother, something would have to happen to Crispus. Perhaps unsurprisingly, something did. If we combine the claims of Philostorgius, Zosimus and Zonaras, it is relatively straightforward to conclude that Fausta conspired to accuse Crispus of rape. The credibility of the accusation might be enhanced if young Crispus (himself a married man with a child) actually allowed himself to be seduced by the empress.

In April of AD 320, Constantine had promulgated a law with regard to rape and the various parties involved. This new law, "added the voice of imperial authority to the cause of private morality, which was thus translated into the realm of public concern. Adultery and elopement, like rape, were species of theft from husband and father but also offenses against morality which husband and father had no business to ignore, whatever their personal inclinations.” [Dixon: Reading Roman Women, page 52]

The punishment for rape under Constantine was very severe—it was actually softened in AD 349 by Constantius II to capital punishment. According to Judith Evans Grubbs, “The original penalty may have been summum supplicium (‘the supreme penalty’), a particularly atrocious and degrading form of death such as condemnation ad bestias [that is, to be torn apart by wild beasts] or burning.” [Grubbs: Law and Family in Late Antiquity, page 186]

Events came to a head sometime in AD 326. Perhaps Fausta accused Crispus directly to her husband of attempting to rape her. Perhaps Crispus, knowing himself guilty of adultery and incest, could not convincingly refute the charge. In any event, Constantine evidently believed the accusation and found himself forced to inflict the penalty of his own laws upon his beloved son. Anything less would have been supremely un-Roman, hearkening back to stories such as the rape of Lucretia by Sextus Tarquin—an event which led to the overthrow of the last Roman king—and the pitiless but legendary resolution of Manlius Torquatus, who enforced Roman law even to the point of executing his own son.

Compared to an ignominious death by fire or in the arena, Constantine’s supposed mandate of death by poison to his first-born appears almost merciful, though details are lacking.

What then happened to Fausta is equally mysterious. On April 25, AD 326 at Nicomedia, Constantine amended the historical Julian Law on Adultery. Within this law, is the following statement:


“The husband above all ought to be the avenger of the marriage bed, since to him the former Emperors of olden time granted the right to accuse his wife even on suspicion and not be bound by the bond of inscription within the statutory time limits.” [Pharr: The Theodosian Code, Book IX, Title 7.2]

Whether this law was promulgated before or after Fausta met her fate is unknown. What is known is that Constantine’s mother, Helena, who had herself raised Crispus, severely rebuked her son for his precipitate action. Charles Odahl describes the circumstance as follows:


“When Constantine entered the city [of Rome], Helena approached him in mourning, and reproached him for the death of her grandson. With her imperial resources, she may have been able to gain some damnatory evidence that Fausta had deceived him; or, at the very least, she convinced Constantine that he had acted too swiftly and needed to investigate the case more deeply.” [Odahl: Constantine and the Christian Empire, p. 183]

It seems that Constantine did receive some sort of evidence implicating his wife. But Fausta’s crime had been more than conspiracy, seduction or adultery—it was treason. According to another of Constantine’s laws, “since a person convicted in a case of this kind is not protected by the privilege of any high rank from a very severe inquisition, he also must be subject to torture if he should not be able to prove his accusation by other clear evidence.” [Pharr: The Theodosian Code, Book IX, Title 5.1]  Thus, Fausta would have been subject to torture if credibly accused.

Perhaps the evidence was so strong that Fausta admitted her scheme before torture could be applied. Once convicted, there could be only one possible punishment for such a crime—death by the sword—and as before, Constantine could not exempt even his own wife from the just penalty lest he be accused of holding his own family above the law. Perhaps any desire Constantine had to save his wife dissipated once he recalled that Fausta had previously betrayed both her father and her brother, and had now played him for a fool and had her stepson judicially murdered. As in the case of Crispus, however, it seems that Constantine chose not to expose the mother of his sons to death by beheading. Instead, according to Zosimus, he had Fausta placed in a superheated sauna where she perished of hyperthermia.

But Fausta had achieved her ends. She had very effectively removed Crispus, clearing the path to imperial power for her own sons, while at the same time insulating them from implication in the crime. The names of both Crispus and Fausta were effectively erased from Roman biographies, historical works, coins and inscriptions after AD 326. Rumors were bandied about that the reason Constantine became a Christian was because Christian bishops promised that he could be cleansed from his sins via baptism. Sozomen effectively refutes this gossip as “the invention of persons who desired to vilify the Christian religion.” [Sozomen, Ecclesiastical History, Book I, Chapter 5].

The depth of grief felt by Constantine and Helena at this horrific family tragedy can only be guessed. As Odahl posits, there may be clues in that Helena began her epochal pilgrimage to the Holy Land shortly thereafter, and Constantine himself redoubled his munificence toward building and enhancing Christian shrines and churches throughout the empire after these events.

An excellent brief biography of Crispus may be found in Hans Pohlsander’s article entitled: Crispus: Brilliant Career and Tragic End.

An equally excellent survey of Roman laws on rape may be found in Nghiem L. Nguyen's article, Roman Rape: An Overview of Roman Rape Lawsfrom the Republican Period to Justinian's Reign. 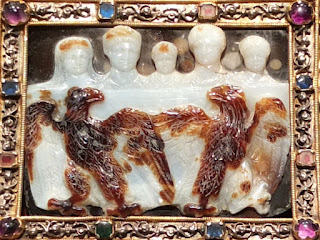 Posted by Florentius at 7:11 PM

That's a good catch. My mistake. I will fix it. Thanks!